Ninjago Wiki
Register
Don't have an account?
Sign In
Advertisement
in: Galleries needing organization, Vermillion, The Hands of Time,
and 12 more
English

View source
watch 01:25
Jurassic World: Dominion Dominates Fandom Wikis - The Loop
Do you like this video?
Play Sound
“Ha! What a joke. We are commanders. Guarding this guy is totally beneath us. How could Acronix and Krux put Machia in charge? They ignored our courage! Our dedication! Our singular focus.”
— Blunck to Raggmunk, "Pause and Effect"

Commander of the Vermillion army

A Time of Traitors
70622 Desert Lightning

Brian Dobson
Commander Blunck was a high-ranking Vermillion who commanded the latter alongside Commander Raggmunk and Supreme Commander Machia.

While Blunck was trying to show the Time Twins the plan, Raggmunk constantly interrupted him.

The two later went to Ninjago to kidnap its citizens.

Raggmunk and Blunck watched as the Vermillion stole all the metal in Ninjago.

Blunck commanded the Vermillion Army to steal metal from the junkyard. However, he received a message from Machia stating they needed to retrieve the Slow-Mo Time Blade from the Sea of Sand instead

They reached to the desert and secured the Blade before the ninja. When Raggmunk blasted and missed the ninja with the Time Blade, Blunck took over and scored a direct hit. After the ninja were freed from the time bubble, the two commanders fought over the Blade and accidentally trapped themselves in a time bubble.

The ninja then were able to get away with the Blade, but not before they used it on the Vermillion. The Vermillion generals failed, and they grudgingly informed Machia.

In their failed attempt to the Slo-Mo Time Blade, Raggmunk and Blunck instead planned on trading Cyrus for it, except Machia wouldn't give Cyrus to them for that cause. But the Time Twins tells them that their plan wouldn't work. So Blunck attempts to explain another plan but was interrupted by Machia.

After arriving at the Temple, they started to attack the ninja.

As Blunck and Raggmunk brought Wu to their dome, they were told that Machia has been promoted and they had to obey her, which makes shocked and angry.

Blunck and Raggmunk paced outside Wu's cell. When Raggmunk told him he missed breakfast, Blunck got an idea to take him with them.

When they came back, Blunck fought Lloyd while Raggmunk ran away with Wu. Later, Raggmunk and Blunck were able to regain Wu and bring him back to his cell. Machia figured out they lost Wu and scolded them.

When Machia shows Wu to Kai, Nya, and their parents, Raggmunk says that they had him the whole time.

Blunck and Raggmunk try to find any sign of the ninja but find none. They celebrated their victory and claimed they'll be getting a promotion. They then brought the Army back to the Dome.

Later, they see Cyrus trying to sabotage the Iron Doom, the Vermillion fought the ninja until they were instructed by Machia to go there.

When Machia was ordered to prepare the Vermillion, Blunck and Raggmunk went with her. Krux and Acronix would eventually destroy them to take their helmets.

Despite the fact that he is a fierce fighter, Blunck is insecure and quick to get upset when he thinks others – especially Raggmunk – are taking credit for his work. He can also be passive-aggressive when he’s questioning the other commanders’ decisions (especially when it comes to naming field operations). Sometimes he lets his stomach get the best of him, shirking his duties in favor of hitting the mess hall. Like Raggmunk, Blunck is intimidated by General Machia, and is quick to back down any time she confronts him. Krux and Acronix smash Blunck’s armor, breaking him back down into his component snakes so they can use his telepathic helmet to control the Iron Doom. The snakes are absorbed into the Iron Doom, giving it some of Blunck’s personality and voice.

Blunck was one of the commanders to Krux and Acronix. He and Raggmunk keep trying (but failing) to please the Time Twins and prove themselves better than Machia. After the Time Twins time-travel back in time to the Battle for All of Time, they relieve Blunck, along with Raggmunk, of their duty.

Blunck views Machia as competition, he and Raggmunk try their best to please the Time Twins and prove that they are better than Machia.

Blunck and Raggmunk in an illustration by J. Jesús Fernández 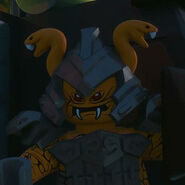