View source
watch 01:25
Jurassic World: Dominion Dominates Fandom Wikis - The Loop
Do you like this video?
Play Sound
“Ugh! This room could use a breath of fresh air. Lightning, meet Nature!”
— Bolobo to Jay in "Only One Can Remain"

Michael Adamthwaite
Bolobo is the current Elemental Master of Nature. He was a competitor in Master Chen's Tournament of Elements, alongside the other Elemental Masters of his generation. In the second round of the event, Bolobo fought against Neuro, who used his element to mess with Bolobo's mind and eventually defeat him by securing the Jadeblade. Afterward, Bolobo was ridden of his powers and forced to work in Chen's noodle factory. Eventually, Bolobo united with the other Elemental Masters to restore their elements.

Bolobo and the Elemental Masters united against Chen, who completed a spell that transformed him and his followers into fake Anacondrai. Consequently, an ancient conflict was renewed, as the new alliance of Elemental Masters fought the Anacondrai warriors at the Corridor of Elders. There, Bolobo and his allies battled Chen's army, before Garmadon sacrificed himself in a bid to banish their adversaries to the Cursed Realm.

Months after the war's end, Nadakhan imprisoned Bolobo in the Djinn Blade, but after Jay made his final wish, these events were erased and he was freed.

After Garmadon conquered Ninjago City, Bolobo was hunted down in a show led by Ultra Violet called Ultra Hunt, and placed in Kryptarium Prison. Later, Bolobo escaped Kryptarium and wasn't present during the victory celebration.

Bolobo was born as the descendant of a previous Elemental Master of Nature. He unlocked his True Potential before the events of Tournament of Elements.[1]

Bolobo was one of those invited to participate in the Tournament of Elements. He accepted and came to New Ninjago City pier, where they were picked up by Clouse and boarded to Chen's Island by ferry. During the voyage, Bolobo amazed Cole by showing off his powers by growing vines from his driftwood bo staff.

Arriving on the island with the others, he was present at Master Chen's opening speech and led to his room. When the tournament started, he entered Jay's room just as he was taking a bath, trying to find a Jadeblade. He soon found one in a light but got distracted when Jay put on Starfarer: Samurai in Space, resulting in the Master of Lightning taking the Jadeblade and hitting the Master of Nature with his towel. Despite this, Bolobo still found another Jadeblade and advanced to the next round of the tournament.

The next day, Bolobo was announced as the second competitor of the second match, where he fought against Neuro for a Jadeblade. Bolobo trapped the Master of Mind in vines and nearly won, but Neuro messed with his mind and captured the blade. After Bolobo lost, Chen activated a trapdoor, in which he fell. After that, Chen took away Bolobo's Element by Staff of Elements and sent him to the noodle factory.

Bolobo was checking fortune cookies in the noodle factory during the episode.

Bolobo was working in the noodle factory when Cole attempted to escape and cheered him on.

After the factory was put on lockdown, Bolobo and the other imprisoned Masters gather around Zane and Cole, who emerge from hiding, to explain their plan to use the sewer pipes to escape, though the plan was foiled thanks to the arrival of Dareth. After they decided to build a Roto Jet to blast their way out, Bolobo searched the factory for usable parts.

Bolobo continued helping the other Masters with building the Roto Jet, which they soon complete. They use it to break through the swarms of guards and into a room with skeleton remains, where they rescue Nya and Garmadon from the Anacondrai serpent by shooting at rocks, that later fell on it to death. They soon break into the Anacondrai Temple, where they disrupt his spell to turn into Anacondrai and battle the Anacondrai Cultists. When Kai destroys the Staff of Elements, Bolobo's element returned to him, allowing him to overpower the warriors and force Chen to retreat with only a few henchmen and capture Skylor. With Chen in hiding, the Elemental Masters take control of the island while awaiting Chen's next move. Bolobo is seen guiding captured guards outside and is shown laughing when Zane turns on his funny switch.

Under orders from Jay, Bolobo uses his vines to sink the ferry. He and the other Elemental fighters still guarded captured Chen's followers, and then battled them when they turned into Anacondrai. After the Elemental Masters were locked up in the palace, he was shocked as Chen and his transformed army leave the island. Later, Bolobo sees Zane and Kai using Elemental Dragons, which motivates him to unlock his Elemental Nature Dragon and join them in flying back to Ninjago.

Bolobo and the other Masters arrive at Ninjago City on their elemental dragons, only to find that Chen hasn't attacked before, and later ordered by Lloyd to watch over the city.

He is with the other Masters when they try to intercept Chen's noodle trucks, that most likely hold several Anacondrai, but the trucks travel in separate directions. Bolobo pursued one of the separated trucks from reaching a village only to find out it was empty, being Chen's plan.

Like many others, he lost his dragon because of fear and was left stranded as Chen invaded without a problem.

After receiving a message from Neuro, Bolobo met up with the other Masters in the Samurai X Cave, where they discuss Chen's next plan and decide to make their stand at the Corridor of Elders. Bolobo later fought alongside the other Elemental Masters with Anacondrai warriors. Following the Cultists' banishment to the Cursed Realm by the souls of the released Anacondrai generals, Bolobo celebrated with the other masters when victory was achieved. He is seen making amends with the ninja promising to help them in the future before helping clean up the wreckage left behind.

At some point, Bolobo was visited by Nadakhan, who was trying to remove all opposition, and by three wishes, the djinn imprisoned Bolobo in the Djinn Blade.[2]

After Emperor Garmadon's takeover of Ninjago City, Bolobo was found during the early days of Ultra Hunt and was captured and placed in Kryptarium Prison.[3] Ultimately, Bolobo escaped Kryptarium, along with other people who were captured by Ultra Hunt or who were part of the Resistance, though for some reason, Bolobo didn't help the ninja to defeat the Colossus and didn't come to a celebration of victory over Garmadon's forces and the city's liberation.[4]

Being the Master of Nature, Bolobo takes on a rugged/primitive design. He has very thick brown eyebrows. He has long, shaggy brown hair and a beard to match. He wears a dark green raggedy sleeveless shirt hidden by multiple belts as armor with a feather necklace, along with pale green shorts with the ends tied down with rope. He is always shown to be barefoot.

His Legacy minifigure has much thinner eyebrows and a small scar on the cheek. He also has an exposed chest and abdomen, covered with a belt and feather necklace. He has a small bag with plants on his belt on his back. His body is also covered with many green spiral-shaped tattoos or paintings. He has no bare feet, but green boots.

Bolobo is a jovial fighter who has the power to control nature. He can grow things at will and control the plants and trees of nature. He truly has green fingers, but he rarely lays them on anyone. This he leaves to the roots, branches, twigs and leaves he controls.[5] 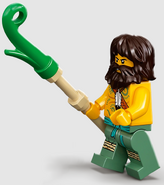 Bolobo fighting Neuro with his element

Falling through the trapdoor