Ninjago Wiki
Register
Don't have an account?
Sign In
Advertisement
in: Objects, Ninjago, Ninjago: Masters of Spinjitzu,
and 12 more
English

View source
“You should've known. The book was last thrown into a fire. Perhaps you should wish for more than a pile of ash.”
— Nadakhan to Clouse, "Infamous"

Destroyed
The Book of Spells (also referred to as the Book of Magic or Clouse's Spell Book[1]) was a magic spell book that belonged to Clouse during the Serpentine War. Another spellbook was used by Garmadon after the Serpentine War to banish the Anacondrai generals to the Cursed Realm.[2] Clouse kept his spellbook through the Tournament of Elements until he was banished into the Cursed Realm. After this, the spellbook came into the hands of Lloyd, who decided to burn it as an offering to his deceased father.

Clouse held the book while the Anacondrai were fighting the Elemental Alliance at Birchwood Forest.

After the Serpentine War, Garmadon used another spellbook to banish the Anacondrai generals to the Cursed Realm.[3][2]

Attempting to prevent the battle between Jay and Cole, the ninja head off to meet Neuro, believing he is the key to their answers. Neuro uses his abilities to read Lloyd's mind; following the events of before, the Master of Mind discovers the fallen foes' dreadful futures. Willing to except an allegiance, Neuro heads to Clouse's spell book to see if he could find anything to help. Unfortunately, he is not successful and apologizes to the ninja.

Nya sneaks in Clouse's room to find the book and steal the transformation spell from it. Clouse notices it, and informs Chen. Eventually, Nya's cover is blown and the spell is found.

After Clouse's banishment to the Cursed Realm, Chen has Kapau and Chope read the spell, now that they have Skylor and Kai. Eventually, the spell is complete, and everybody with the Anacondrai tattoo is affected and turned into a lookalike Anacondrai.

After victory over the Anacondrai Cultists, Lloyd burns the spellbook, so it never falls into the wrong hands again.

Clouse managed to free the Djinn known as Nadakhan from his imprisonment. Clouse's first wish was to be given back his spell book, he was so excited that he believed that with this magic he wouldn't need his other wishes. However, the book crumbled into ash as Nadakhan explained that the book was burnt shortly after Clouse was banished. This infuriated Clouse as he was forced to make his last two wishes which leads to Nadakhan trapping him later on.

The Book of Spells has a purple cover resembling scales with gold spines that protect the corners of the book from damage. In the center of the envelope is also depicted a golden snake eating its own tail, with the same snake facing downwards inside. The book has a number of pages that are slightly yellowed. There is relatively little text on each page and many obscure images of snakes and aids to the spells. The book also has a red bookmark with a notch at the end resembling a snake's tongue.

Also referred to as The Book of Spells. Clouse’s Spell Book is an ancient volume belonging to the Master of Dark Arts, filled with powerful magic and forbidden spells. Master Chen’s particular interest in the book was the Spell of Transformation, which would allow him and his Cultists to turn themselves into Anacondrai. This transformation is only temporary, however – in order to make it permanent, the essence of a true Anacondrai is needed. This little though essential information is found on page 148. Another spell in the book can be used to banish someone to the Cursed Realm. After Master Chen’s defeat, Clouse’s Spell Book was burnt by the ninja.[1] 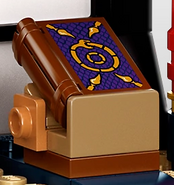 Garmadon reading from the book.