Brickmaster Ninjago: Fight the Power of the Snakes
Brickmaster Ninjago is a Ninjago: Masters of Spinjitzu set that was released in August 2011. It includes Kai, Frakjaw (without his armor or headgear), a Silver Bone Axe, a Golden Katana, a Dark Axe, two Spears, and one Katana.

Build the coolest vehicles, buildings, and LEGO® Ninjago structures you can imagine! Enter the world of Ninjago, the LEGO Group's exciting new line of ninja-themed structures and minifigures, featuring an entire world of ninja heroes, villains and storylines. With 154 LEGO® bricks, two minifigures, and a book of instructions and stories, this Brickmaster kit lets young ninjas build and play to their heart's content. 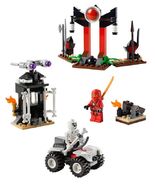