View source
watch 01:25
Jurassic World: Dominion Dominates Fandom Wikis - The Loop
Do you like this video?
Play Sound
“Come on. That's not what he's saying. Give that to me. I can read lips way better than you.”
— Bucko to Sqiffy, "Operation Land Ho!"

Brian Dobson
Colin is a citizen of Ninjago. During the construction of Djinjago, Colin and his colleague, Landon, sought to become Sky Pirates, and was given the name Bucko by Nadakhan in the progress.

After the events caused by Nadakhan were undone, Colin became a regular citizen again until he was recruited by Clouse and joined the Sky Pirates once more. Eventually, Clouse was defeated by Master Wu and the ninja while Bucko and the rest of the Sky Pirates were sent to Kryptarium Prison.

Alongside Landon, he would seek to become a part of Nadakhan's crew. After being brought to the Djinn by Flintlocke, he introduced himself as Colin, only to be renamed Bucko, and his colleague Sqiffy, and was promptly dismissed.

Alongside his partner, Bucko would guard Nya as Doubloon and Clancee attempted to fit her into her dress, and would welcome Dogshank upon her return, quickly being dismissed.

Later, Bucko and Sqiffy would attempt to spy on Jay and his team of Ninja Replacements, with Sqiffy relying on his lip-reading skills, only to be fooled by an aware Jay. Upon realizing the two of them had been spotted by Echo Zane, he and Sqiffy attempted to warn the rest of the crew by escaping on their vehicles. When Skylor attempted to board his plane, he managed to throw her off and finally regrouped with the rest of the Sky Pirates, warning them of Jay's attack. Later, after placing several pirates under his command, he would attack Jay and his team of Ninja Replacements, deciding to warn Nadakhan after the battle. However, he would ultimately be defeated after Jay released his friends from the Djinn Blade.

As a result of Jay's final wish undoing the events of Nadakhan's actions, Bucko was restored back to his status as a generic citizen and consequently renamed Colin, with no memory of what had happened. However, his dreams of becoming a pirate would be granted once more by Clouse, who, needing the Sky Pirates and others to kidnap a workforce to harvest Dark Matter on the Island of Darkness, recruited him as part of his plot. Unknowingly reunited with his crew, Bucko would assist on routine kidnappings of fishermen, using the cover of storms to perform their hostile raids.

Detaining an escaped prisoner, Bucko and his fellow Sky Pirates would be ambushed by Jay and Nya, and unable to withstand the onslaught was quickly downed by an electrified Water-Dragon. Recovering from the battle to witness the two ninja and Ronin in battle with the Leviathan, Bucko took the opportunity to retreat alongside his fellow pirates to Digger's Deep, where they regrouped and warned the others of the threat.

Anticipating the arrival of the ninja, Bucko and his fellow guards were caught off-guard by a Dark Matter-enraged Lloyd, who easily dispatched them while mocking their lack of skill. With Lloyd and the rest of the ninja heading further into the mines to rescue the prisoners, Bucko regrouped under Flintlocke's command to attack them upon their exit. However, the ninja, armed with the commandeered Titanium Ninja Tumbler and Ultra Stealth Raider, quickly drove them off, forcing the Sky Pirates to retreat to the Temple of Light to aid Clouse in the final steps of the plan.

Regrouping with Clouse at the Billy Badlands, Bucko helped defend the final Dark Matter convoy alongside his fellow Sky Pirates. Despite initial resistance from the ninja, Bucko succeeded in escaping after Clouse summoned a sandstorm to separate the groups, and completed his task of corrupting the Temple of Light. Tasked with defending the area with the other Sky Pirates and an army of summoned Shadows, Bucko was unable to halt the advance of Master Wu in the Golden Mech. With Clouse defeated and the Dark Matter purged, Bucko was quickly rounded up and sent to Kryptarium Prison for his crimes.

This new recruit to Nadakhan’s crew isn’t really called “Bucko”, but both he and his captain thought that sounded suitably “piratey”.[1] 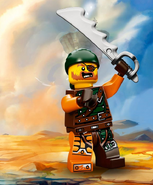 In "The Tall Tale of Sqiffy and Bucko"