Ninjago Wiki
Register
Don't have an account?
Sign In
Advertisement
in: Galleries needing Organization, Ninjago, The Hands of Time,
and 14 more
English

View source
watch 03:36
Wiki Targeted (Entertainment)
Do you like this video?
Play Sound
“
That was merely the first salvo. Next, we bring in the big boy.
— Machia, referring to the Buffmillion in "The Attack"
„

Unknown
Buffmillion[1] (also called the big boy by Machia)[2] is a type of large Vermillion, acting as the tribe's heavy troops.

After the ninja defeated the invading Vermillion, they regenerated to form a Buffmillion. It quickly overpowered the ninja, but Kai and Nya used a technique they learned while tormenting their childhood babysitter to send it over the edge of the island.

Two Buffmillion were on the lookout for the ninja but did not realize Jay and Cole passed them.

When they heard a loud bang, the Buffmillion went in to see what was going on. They were able to outnumber Jay and Cole but when Lloyd and Zane helped, the Vermillion were defeated.

When Jay blew his team's cover, several Buffmillion went to attack them but were ran over by the Samurai VXL. They continued to chase the ninja to the Iron Doom. When Machia told the Vermillion to go to the Iron Doom, they stopped fighting.

These rare four-headed troopers are the biggest, meanest Vermillion Warriors. With their superior strength, the Buffmillion are well suited for jobs that require heavy lifting or fights that need overwhelming force. Always focused on their mission, they go about their duties silently and relentlessly which, combined with their large size, makes them the toughest Vermillion to stop. One particular Buffmillion accidentally remained behind in NINJAGO City after the completion of Operation Heavy Metal.[1]

Unlike their smaller brethren, their only humanoid features are their bulky torso and arms; they have large tails instead of legs, four tendril-like snake tails for hands, and four Vermillion serpents for heads. 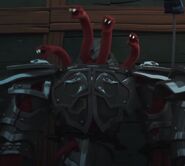 In "Pause and Effect"