View source
watch 01:25
Jurassic World: Dominion Dominates Fandom Wikis - The Loop
Do you like this video?
Play Sound
“I'll tell you once the world stops whirling around!”
— Cardinsto to Wu, Stone Cold

After defeating Time Ninja, Wu attempts to find sleep, only for his staff, alongside other wooden objects, to come to life and attack him. Incapacitated, he's confronted by Cardinsto, a man with the ability to control nature. Bragging that even if Wu's powers were as numerous as insects in a field, Cardinsto proceeds to make the entire building collapse on Wu before taking his leave.

Master Wu, however, narrowly survives and realizes that someone was directing the escapees' attacks on him. Before he can decide, however, Cardinsto attacks a town with his army of plants, forcing Wu to intervene. Using Spinjitzu, he tunnels underground several times, eventually awaking and incurring the wrath of a massive beast that had been slumbering underground.

Desperate to escape the monster, Cardinsto is rescued by Wu, who reveals the beast can only stay awake for a minute at a time, even as the creature promptly falls asleep. After using Spinjitzu to leave Cardinsto incredibly dizzy, he manages to learn at least that the one directing the attacks has an enormous hatred of him. Before he can learn the being's identity, however, a flash of light blinds Wu, and even as Cardinsto screams in horror, he disappears, leaving behind several weapons and bones. It is unknown what the flash of light was meant to be. 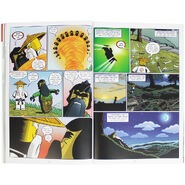