Ninjago Wiki
Register
Don't have an account?
Sign In
Advertisement
in: The LEGO Ninjago Movie, 2017 characters, Males,
and 5 more
English

View source
watch 01:33
Wiki Targeted (Entertainment)
Do you like this video?
Play Sound
“
Oh, my gosh. The Green Ninja is Lloyd Garmadon?
— Chad
„

Chad is a student and cheerleader at Ninjago High School. He is known to be Maggie's friend and one of the more vocal bullies of Lloyd Garmadon.

Chad and a couple of cheerleaders see Lloyd and his friends and show their new cheer called "Boo, Lloyd!" Lloyd sarcastically replied that they have a #1 hit on their hands, but they take it seriously and soon sang it on the radio.

He is later seen near the end of the movie among the surprised civilians when Lloyd revealed himself as the Green Ninja. 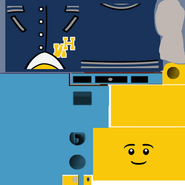