Chair Play Chen is the second short based around Master Chen and his throne, taking place sometime during or before the fourth season of Ninjago: Masters of Spinjitzu.

Chen and Clouse play table tennis, but Chen loses several times. Enraged by this, Chen pushes a button that fires ping pong balls at him. He then serves another ball over the net and declares himself the winner. He stands on the table, but the table folds on him. 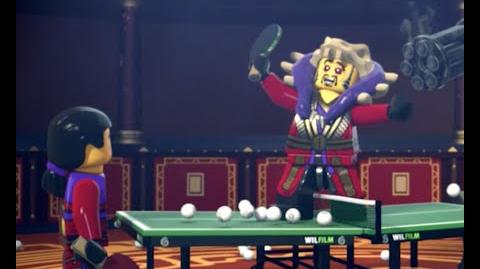 Clouse drinking from his cup.

Chen falls on the table.

If you look closely, you will see the WILFILM logo—one of the producers of Ninjago.

Many ping pong balls being lanuched at Clouse, who doesn't really seem to care.

The ping pong table closes in on Chen.
Deutsch Русский
Community content is available under CC-BY-SA unless otherwise noted.
Advertisement