View source
watch 01:25
Jurassic World: Dominion Dominates Fandom Wikis - The Loop
Do you like this video?
Play Sound
“I hear she can look like anyone. She'd be right under your nose, and by the time you figure it out, she's discovered all your weaknesses, then it's game over.”
— Chamille as Kai to Lloyd, "Ninja Roll"

Marÿke Hendrikse
Vincent Tong (as Kai)
Chamille (also spelled Camille[1]) is the current Elemental Master of Form and was a competitor in Master Chen's Tournament of Elements, alongside the other Elemental Masters of her generation. Chamille competed against Lloyd in the Thunderblade round, a game where Elemental Masters can choose whom to side with. The ninja sided with Lloyd while everyone else stood with Chamille. After an intense series of obstacles and attacks mainly from Chamille and her group, Lloyd won the round, but Chen tried to disqualify him anyway. The Elemental Masters threatened to quit the game if he did so, forcing Chen to announce Chamille as the loser. Afterward, she was ridden of her powers and forced to work in Chen's noodle factory. Eventually, Chamille would ally with the other Elemental Masters to reclaim their elements.

Chamille and the Elemental Masters united against Chen, who completed a spell that transformed him and his followers into fake Anacondrai. Consequently, an ancient conflict was renewed, as the new alliance of Elemental Masters fought the Anacondrai warriors at the Corridor of Elders before Garmadon sacrificed himself in a bid to banish their adversaries to the Cursed Realm.

Months later, Nadakhan imprisoned Chamille and the other Elemental Masters in his Djinn Blade, though these events were erased after Jay made his final wish.

According to Karlof at the time of the Fall of Ninjago, Chamille is now a "bad girl".

Chamille was later visited by Skylor, whom she accompanied in search of the latter's mother.

Chamille was born as the descendant of the Elemental Master of Form.

Chamille was one of the Masters who boarded Chen's ferry to the Tournament of Elements.

Chamille was present as Chen explained how the Tournament worked. She was later escorted to her suite by the Kabuki, and then obtained a Jadeblade in the competition.

Chamille was seen watching the three Tournament fights in the background with other Elemental Masters.

Chamille was seen watching the next fight between Skylor and Jacob. As Kai stepped on her foot trying to sit with the other ninja and Garmadon, along with Cole and Jay's teamwork causing everyone to sleep in the dining room together, she and the others were left aggravated.

Later, Chamille was among the Masters who roller-skated in the Thunderblade game, playing as one of the main competitors against Lloyd with everyone except Jay and Kai siding with her. The two fought continuously to win the game, with Lloyd using a Jungle Raider, until he gained the upper hand and won. Despite Chen's insistence, he was forced to eliminate her to ward off suspicion.

Stripped of her powers, Chamille was seen working in the noodle factory. She, along with a few other workers, cheered for Cole when he was trying to escape.

After the factory was put on lockdown, Chamille and the other imprisoned masters gather around Zane as Cole explained their plan to use the sewer pipes to escape, though the plan was foiled thanks to the arrival of Dareth.

After they decided to build a Roto Jet to blast their way out, Chamille searched the factory for usable parts.

She and the other Elemental Masters began working on the Roto Jet, as more eliminated fighters come aiding them in getting it ready. Much later, they finished working on the Jet, using it to break through the swarms of guards and Clouse's serpent and disrupt Chen's spell.

They battle the Anacondrai warriors before Kai destroys Chen's staff, returning the elements to their respective Master and allowing them to overpower the Anacondrai warriors. This forces Chen and a select few henchmen to escape. With Chen in hiding, the Elemental Masters seized control of the island while awaiting Master Chen's next move.

She stood guard over the warriors until they became Anacondrai and forced them to retreat to the palace. She was blasted at by Chen in the Roto Jet as he and his followers escaped to invade Ninjago.

As all seemed lost, Chamille and the others found hope when Zane and Kai arrived on Elemental Dragons after facing their fear. Inspired by this, she unlocked her Elemental Dragon and started the journey back to Ninjago.

With her dragon, Chamille flew back to Ninjago with the other Masters only to find Chen hasn't attacked yet.

She then pursues a noodle truck possibly holding several impostor Anacondrai only to find them empty. Like many others, she loses control of her Dragon out of fear after being tricked by Chen into scattering all across Ninjago.

She regroups with the other Elemental Masters at the Samurai X Cave, where they decide to make their final stand in the Corridor of Elders. She participates in the final battle against the Anacondrai warriors, managing to take down a few of the fake Anacondrai before witnessing them being cursed and banished to the Cursed Realm.

She is later seen with the other masters celebrating their victory while making amends with the ninja promising to help them in any future conflicts.

At some point, Nadakhan attacked Chamille and succeeding in absorbing her soul into the Djinn Blade.[2]

Despite the Elemental Masters' promise to help the ninja in the future should the need ever arise, at some point after the tournament, Chamille presumably chose to pursue a life as a villain. Having become a "bad girl" according to Karlof, Chamille, unlike most of the Elemental Masters, did not join the Resistance.[3]

Chamille is a playable character in LEGO Ninjago: Tournament. She can be purchased for 300,000 studs. Her special move is Chameleon, allowing her to briefly change form into Clouse.

Chamille is a real chameleon with the ability to change her physical appearance. She can either be a friend or a foe, depending on her whim. She changes her allegiance as easily as she changes face. So be careful about who you tell your weakness to, because it might not be who you think it is.[4]

Chamille (behind Zane) in the Tournament of Elements mural.

Chamille and Lloyd's scores on the board

Chamille crossing the finish line in the Thunderblade competition

Chamille on her Elemental Dragon 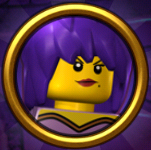 Chamille as she appears in the Tournament of Elements App