Ninjago Wiki
Register
Don't have an account?
Sign In
Advertisement
in: Ninjago: Masters of Spinjitzu, 2019, 2019 weapons,
and 5 more

Intact
Char's snake scepter[1] is a weapon used by Char.

Sometime during his lifetime, Char gained his scepter and was buried in a sarcophagus after his death.

When Char was brought back to life, he was resurrected with the scepter in his hand.

Char holds the weapon while talking to Aspheera.

Char uses the weapon while invading the Monastery of Spinjitzu.

Char escapes the fight with his scepter. 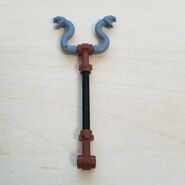