View source
“Finally, Clouse. It's so beautiful!”
— Chen about his chair in "Chen's New Chair"

Only One Can Remain
70595 Ultra Stealth Raider

Intact
Chen's Chair (also known as the Smart Throne 3000) is a mobile throne with many tools and gadgets build into it.

Chen got his chair and refused to read the instructions, so they end up in the jungle, and Chen tells Clouse to carry him home.

The throne would appear to be connected to many gadgets and machines in itself and on Chen's Island, ranging from trap doors, to conveniently placed sand bags. 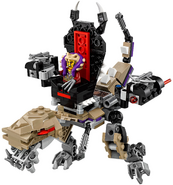 In LEGO form, atop the Chenosaurus

Illustration by J. Jesús Fernández of revived Chen in his chair

As part of the Ninja exhibit 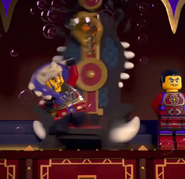 The chair moving side to side 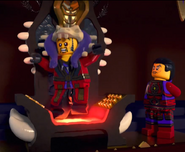 The chair heating its seat

The chair slamming the ground repeatedly

The chair suspending a carrot

The chair ejecting its boxing glove

After unboxing the throne