Ninjago Wiki
Register
Don't have an account?
Sign In
Advertisement
in: Ninjago, Ninjago: Masters of Spinjitzu, Characters,
and 26 more

View source
“Chickens are fast and dangerous!”
— Jay to the ninja, "One Step Forward, Two Steps Back"

The Master
70751 Temple of Airjitzu

Mystery of the Lost Power
70670 Monastery of Spinjitzu (statue)

Abbi Jacobson (The Master)
Chickens are animals that live in Ninjago, the Never-Realm, and Prime Empire. Wu somehow obtained a chicken at some point after the Oni's invasion. Okino also owns a chicken.

Since ancient times, chickens have inhabited the Mountains of Impossible Height. The first monks built the walls of the Monastery of Spinjitzu extra tall to keep them out. However, they failed and many monks were lost. In order to survive, the monks became faster, stronger, and more cunning, evolving into ninja.

After the Oni's invasion, Wu found a chicken in the area around the monastery upon seeing his ninja become lazy.[1]

After catching the ninja in their "hot tub," which they made out of a sacred bell, Master Wu gives them a lecture on monks who became ninja and combat strange animals while the chicken was in a nearby box. Wu then tells them to survive five minutes with what was inside and left. When the box opened, revealing the chicken, the ninja assumed it was a joke until it suddenly glows with a creepy blue color and attacks them. They all manage to grab the chicken and put it back in the box in less than five minutes.

Later that night, when Cole goes for a fridge raid, the chicken was in it and attacked him.

The following morning, after defeating his ninja easily, Wu unleashes his chicken on them as punishment.

The chicken was seen pecking at the ground while Wu swept nearby when the ninja came back, following some failed quests, dead ends or false leads when helping the Ninjago City Police.

As the ninja unintentionally overpack, Jay was chasing after the chicken as it wore his travel pillow before grabbing it. It tries to grab it again, but Jay moves it away.

A small montage of what the ninja were doing showed one with the chicken chasing Lloyd, Jay, and Zane for having a picnic.

The chicken was on one of the paperboys' bikes during the Pyro Vipers' attack.

While the Pyro Vipers were searching for Wu, the chicken attacks a Pyro Viper in the kitchen.

After getting the wrong bag, Lloyd tries to go for the other bag containing Traveler's Tea. However, he comes across the chicken. He tries to shoo it away, but it blasts him out of the room before landing next to Wu, who pets it for its accomplishment.

The chicken passes by Wu and P.I.X.A.L. as they try to create a portal to the Never-Realm.

Vex tried grabbing a chicken, but it managed to escape his clutches.

A chicken is seen wearing a police officer's hat, with the owner chasing it.

A chicken is seen behind the bars at Kryptarium Prison.

A chicken appears on top of a building where the League of Jay were fighting aerial drones.

There is often a chicken near Okino's house and in it.

The chicken appears as a possible opponent for Lloyd.

Milton Dyer feeds a chicken while talking to P.I.X.A.L..

Fugi-Dove is seen feeding a group of birds including a chicken.

Wu's chicken was with Cole as he plays Prime Empire, but struggles to play itself before Lloyd comes in, and decided to play it. It later chases the Postman away.

A chicken is seen as one of the Kryptarium inmates that escaped.

A chicken is seen as one of the sacrifices that the Keepers gave to "Wojira."

When the ninja fight Miss Demeanor's henchmen, there is a chicken on the rice fields. Later, when the villagers run away from the village, the chicken also runs away and falls into Jay's hands.

A chicken is laying on Nya's bed when Maya goes to check up on her before she starts to clean up the room, and shoos the chicken away, even though it indignantly clucks.

After the paperboys left to deliver newspapers, a chicken closed one of the doors of the warehouse.

A chicken was at Ninjago Harbor until it was blown away by the wind.

A chicken attacked a Maaray Guard and was present at Nya's memorial. 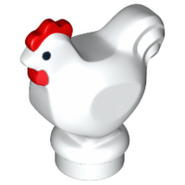 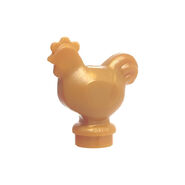 Statue of the chicken 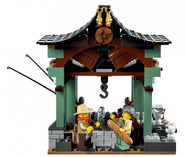 About to attack the ninja

Chasing Lloyd, Jay, and Zane for having a picnic

Catching Lloyd in the act

Stuffed chicken in the Explorer's Club

Being petted by its master

The chicken passes P.I.X.A.L. and Wu

One of the Never-Realm's chickens

One of the Never-Realm's chickens attacking Vex

A Formling as a chicken

A chicken behind a paperboy

Being lazy with Cole

Wind vane with a rooster in the lower right corner