Ninjago Wiki
Register
Don't have an account?
Sign In
Advertisement
in: Episodes, 2012, Ninjago: Masters of Spinjitzu,
and 2 more
English

View source
watch 01:25
Jurassic World: Dominion Dominates Fandom Wikis - The Loop
Do you like this video?
Play Sound
“There comes a time when we all must grow up. When that time comes, it's important not to forget the lessons of our childhood because our childhood is the greatest training one can ever have.”
— Sensei Wu

Child's Play is the fifth episode of the second season of Ninjago: Masters of Spinjitzu and the 18th episode overall. It aired on Cartoon Network on August 15, 2012 in the United States.

The Ninjas are turned into children by the Mega-Weapon.[1]

When the Ninja interrupt Garmadon from using his Mega-Weapon to 'turn back the clock' and bring to life the fossils of a monster, the Ninja are hit and turned into kids and are now forced to enlist Lloyd's help to battle the awakened monster.[2]

The episode begins with the Destiny's Bounty flying over the Jamanakai Village, with Lloyd lamenting that he must train and not play with others or enjoy his youth. Nya then tells the ninja that Lord Garmadon has been spotted at the Museum. As the ninja leave, Lloyd complains to Nya about being too old for comics, but too young to fight, before she offers him to fight her.

Once there, Lord Garmadon tells the Serpentine he is going to revive the extinct Grundle in another attempt to destroy the ninja. As he is using the Mega Weapon, the ninja watch, then burst in and interrupt the process.

Garmadon leaves in a hurry, while the Serpentine Generals steal a golden sarcophagus for compensation. The ninja chase after them but fall behind. The Generals can't fit the sarcophagus through a manhole with them, so they left it behind and escape. The ninja then realize they have been turned into kids. When the police arrive on the scene, they accuse the ninja of the theft and place them under arrest. They take them back to the museum the following morning to apologize for their actions. The museum director accepts their apologies, but questions where the Grundle fossil has disappeared to. The ninja realize the Grundle must have been revived after all, and with the cops not believing them, the ninja escape and disguise themselves and run off with some school kids that are on a field trip. The Grundle appears on top of the museum, scaring a crowd of people in the surrounding area.

Sensei Wu and Nya, worried that the ninja haven't returned yet, leave Lloyd behind to go search for them. As Lloyd is playing a video game, he receives a call from Jay telling him to meet them at a pizza parlor and to bring their weapons, since they can't ride the bus without an adult. Lloyd is confused but quickly arrives. When they meet up, Kai informs Lloyd of the situation and the group wonders what they should do about the Grundle. Lloyd, knowing exactly who would be the most knowledgeable on the creature, brings them to a comic book store and introduces them to the sales clerk, Rufus McCallister. Rufus informs him that Illuma-Swords would work well, as the Grundle is nocturnal, but the shop only gives them out as a prize for winning a comic book trivia competition. Lloyd leaves a message for Master Wu and Nya back at the Destiny's Bounty, quickly telling them of what happened and their current location. Master Wu and Nya then go to Mystake's Tea Shop for Tomorrow's Tea to turn the ninja back into their older selves and the Grundle back into bones.

Meanwhile, Lloyd loses the competition (due to the final question being from a last-issue comic that had just sold out) and the Grundle shows up. The ninja grab the Illuma-Swords to defend against the Grundle, but because they were meant as props they break easily. Lloyd attempts to take on the monster with his powers but is quickly knocked aside. Just as the Grundle is about to consume the ninja, Master Wu and Nya arrive with Tomorrow's Tea, tossing it to them and telling them to use it to age the creature back into bones, as well as themselves back into their normal states. The ninja are hesitant once they realize it would mean Lloyd growing older as well and missing out on his childhood. Lloyd, accepting the consequences, uses the tea to defeat the Grundle. The ninja are returned to normal, but now Lloyd has become their age as well. The episode ends with Rufus handing Lloyd his last-issue comic, which he says he has earned. Lloyd declines, saying he already knows how it ends.

The final scene is a comic cover where Lloyd is defensively fighting against his father under a classic comic book font-stylized title of "Green Ninja." 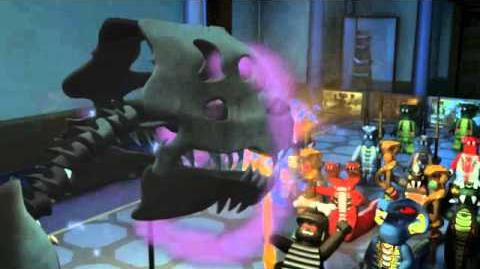 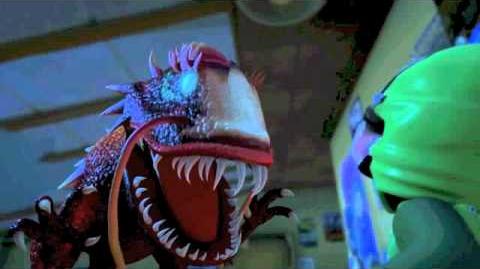