This article is primarily about Chima's appearances within Ninjago. For more information on the realm, visit the article on Legends of Chima Wiki.

Curseworld, Part II
Chima is one of the realms. It was briefly visited by Morro and Lloyd during their fight for the Realm Crystal.

At an unknown point in time, Chima came into existence alongside the rest of the realms.

While Morro and Lloyd traversed dimensions during their battle for the Realm Crystal, they landed atop Chima's Spiral Mountain where Laval, Cragger, and their friends were sitting. Laval inquired what they were doing there, but Morro ushered them away to another realm before the two could reply.

While trying to reach the ninja in the Never-Realm, Wu and P.I.X.A.L. open a portal to Chima, unleashing a group of Beavers on them. They return to their home realm after P.I.X.A.L distracts them with a broken broom they want to fix.

Chima is a massive, floating island hovering above an even larger world. It is mostly comprised of jungles, swamps, and a few deserts. Chima is generally a warm and tropical place, with ice and snow being considered a phenomenon due to the warm climate.

In the middle of Chima is a floating mountain known as Mount Cavora, which is the source of Chi, liquid energy that can be harnessed for a near-infinite amount of different uses. In the skies is the Mother Sun, a mysterious being whose actions led to the creation of the land. Located near a lake is a stone known as the Forever Rock, a former hiding place for one of the Fire Harnesses and above an entrance to one of the other Sixteen Realms.[1]

One of the 16 parallel realms connected to the NINJAGO world, Chima is a world filled with intelligent, talking animals capable of walking on two legs. The various tribes have access to a surprisingly high level of technology and rely on a power source called CHI. It was the site of an epic battle between two alliances over the control of CHI, until other threats forced the warring sides to make peace and work together.[2] 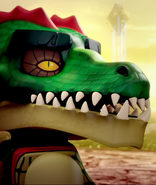 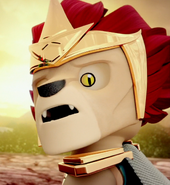