Chopov is a warrior in the Skulkin army, as well as the mechanic responsible for keeping the Skulkin Vehicles in shape. Long ago, Chopov was banished to the Underworld, where he became part of the Skulkin army and assisted his master, Samukai. Chopov aided the Skulkin in their quest to stop the ninja from claiming the Golden Weapons.

The Skulkin managed to claim the weapons, though Samukai's attempt to keep the weapons from Lord Garmadon resulted in his demise. Afterward, Chopov would remain in the Underworld with the other Skulkin, while Garmadon escaped into Ninjago to cause chaos. Chopov and the Skulkin later helped Garmadon fight the Serpentine, who were trying to claim the Fangblades.

NOTE: To fill out the Skulkin ranks in the television series, most of the skeleton characters were used multiple times in group shots. As such, any notable appearances of an Earth Skeleton will be categorized here, for convenience.

At an unknown point in time, Chopov died, and unable to come to terms with his passing was sent to the Underworld, becoming a Skulkin in the process. He would end up becoming the chief mechanic, working alongside Bonezai to create vehicles. Later, when copying down blueprints for the Skull Motorbike, Chopov made several mistakes that ironically resulted in a superior design that was ultimately approved over the original. Later, he would attempt to create another vehicle, the Turbo Turtle, only for it to end up as a failure.[citation needed]

After Garmadon was banished to the Underworld, Chopov and several other Skulkin accompanied their king Samukai, surrounding the Dark Lord. Chopov promptly bore witness to his master's defeat and Garmadon's self-declared coronation.

Assigned to help participate in the Golden Weapon Hunt, Chopov was positioned as a guard at the Caves of Despair, though he failed to detect the ninja until being notified by a careless Jay. Regrouping with his allies at the cave entrance, he fought the ninja and attempted to claim the Scythe of Quakes, only to be driven off by the ninja's Spinjitzu and the Earth Dragon's presence.

Chopov ambushed the ninja alongside the rest of the Skulkin at the Forest of Tranquility, keeping watch over a restrained Zane and Jay. Celebrating the retrieval of three of the Golden Weapons, he was interrupted when Garmadon warned them of the Sword of Fire's presence in the Underworld, causing the Skulkin to change their plans and instead head back home. However, while riding on the front of the Skull Truck, he was ambushed by Jay, who knocked him off; Nevertheless, Chopov eventually made his way back to the Underworld.

Acting as a guard in front of Garmadon's Dark Fortress, Chopov bore witness to the ninja's arrival and attempted to attack them. However, he was sucked into the Tornado of Creation alongside his fellow Skulkin, being trapped in the resulting skeletal Ferris wheel.

Chopov presumably came into conflict with the future Jay after ambushing the ninja at the Forest of Tranquility, only to fail in defeating him as the ninja retrieved the remaining Golden Weapons.

As a result of the destruction of the Mega Weapon, Chopov's involvement in the alternate timeline was erased, alongside any memories of it.

Regrouping with Wyplash, Chopov, alongside Krazi and Bonezai, ambushed Nya at the Four Weapons Blacksmith, with Chopov hiding in one of the rotating walls in wait. However, upon confronting her, he was decapitated by the spinning wall, thankfully surviving due to his undead status. Regaining his head, Chopov and his allies fought Nya, only to be defeated, getting disassembled in the process.

Regrouping at the Fire Temple entrance, Chopov, and several Skulkin, under Wyplash's command, attacked an intruding Kai, easily overpowering him. However, Chopov was sent fleeing back into the Underworld by Kai's attacking Flame, who sealed the entrance in the process.

Upon being told of the Serpentine's plan to awaken the Great Devourer, Chopov and the rest of the Skulkin accompanied Garmadon, confronting the Serpentine within the underground fortress. Clashing with the snakes, Chopov succeeded in helping the ninja escape with the Fangblades in their possession.

Chopov is a playable character in LEGO Ninjago: Shadow of Ronin, though incorrectly wears Bonezai's white Skulkin armor instead of his dark stone gray one. He can be purchased for 50,000 studs after collecting his character token in Level 8: The Skeleton Mines. He is armed with the Silver Dark Blade and is able to open Skulkin locks.

Chopov is dimwitted and also blunt—both literally and figuratively, as he often resorts to striking vehicles that he's tasked to repair with a machete, usually with disastrous results. Despite this, Chopov managed to become the Chief Mechanic of the Underworld and likewise was aspiring, if mediocre, engineer. As a result, he was also prone to jealousy towards Bonezai, even secretly wishing the latter would get captured in order to inherit his position. Additionally, Chopov is rather disobedient, considering rule-following to be his most loathed activity. In battle, Chopov is often prone to cheating, unhesitatingly using under-handed tactics in order to win, having little to no sense of honor whatsoever.[citation needed]

Chopov wears a black military helmet on top of his cracked skull. He dresses in gray earth armor on his shoulders, chest, and pelvis, wearing black boots on his feet. 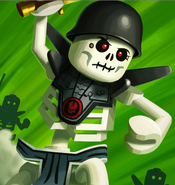 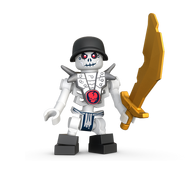 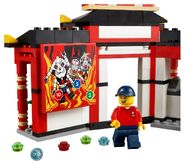 Pictured in the Ninjago World set