View source
watch 01:25
Jurassic World: Dominion Dominates Fandom Wikis - The Loop
Do you like this video?
Play Sound
“Up here we know… let's just say, we know what's going to come next.”
— Fenwick to the ninja in "Kingdom Come"

Peak-a-Boo
The Cloud Kingdom is one of the realms. It is very peaceful, and tranquility flourishes. It can be accessed from Ninjago through the Blind Man's Eye, through use of the Realm Crystal, or if the inhabitants are willing to allow someone to enter.

After scaling the Wailing Alps, the ninja arrived in the Cloud Kingdom through the Blind Man's Eye, seeking the Sword of Sanctuary.

The ninja were greeted in the Cloud Kingdom by Fenwick, who explained the nature of the world to them and revealed Morro's intentions to them, before imprisoning them with Nimbus. He then enabled Morro and his allies to enter the Cloud Kingdom after being contacted by Bansha, before leading them to the keeping place of the sword. However, Cole's ghostly nature enabled the ninja to escape and intercept Morro, and they pursued him in an effort to recover the sword. Nimbus briefly interfered with their plans, until Nobu—a monk not aligned with Fenwick's treachery—rewrote Fenwick's scroll of destiny to make him Nimbus' target instead. The ghosts and ninja then departed the Cloud Kingdom.

Morro and Lloyd later passed through the Cloud Kingdom during their battle over the Realm Crystal. Nobu and another monk observed this, but the older scribe warned Nobu that they couldn't interfere.

While trying to open a portal to the Never-Realm, Wu and P.I.X.A.L. concluded the Traveler's Tea was not strong enough. They add more leaves, and instead, opened several portals to different realms.

The Cloud Kingdom is taken over by the Oni. 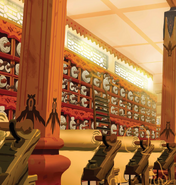