View source
watch 01:25
Jurassic World: Dominion Dominates Fandom Wikis - The Loop
Do you like this video?
Play Sound
“All I did was adventure. Now all I'm gonna do is cash big checks for writing books about those adventures!”
— Clutch, "Under Siege"

The Council of the Crystal King
71741 Ninjago City Gardens

Ian James Corlett
Professor Clutch Powers, also known as Dr. Powers, is a famous adventurer and member of the Explorer's Club. He supposedly created the Blade Cup after finding and retrieving a Fangblade from a pyramid in the Sea of Sand. He helped the ninja enter the pyramid in the Desert of Doom and accidentally release Aspheera. He was blasted away by the hands of Aspheera and survived despite several injuries, including a broken leg.

Not long after that, Clutch became part of Misako's team to explore the Island of the Keepers where they were captured by the Keepers of the Storm Amulet, which he stole.

Eventually, Clutch revealed the amulet to the other members of the Explorer's Club, where he proceeds to show them a false slideshow of his expedition. When Wu and the others arrive to reclaim the artifact, Clutch poorly tries to claim his innocence before Kalmaar arrives. Clutch again acts out of cowardice for his selfish behavior and gives the amulet to Wu before running off. The other members of the club then revoke him from the title of Explorer of the Year.

Clutch was a member of the Explorer's Club and collecting priceless artifacts on his adventures, including one of the Scrolls of Forbidden Spinjitzu.[1] He dreamed about winning the Explorer of the Year reward every single day of his adult life.[2]

Clutch wrote a few books about his adventures, such as Boobytraps and How to Survive Them[3] and Famous Places That I Will Find Before Anyone Else, the latter of which mentioned the Heart of the Mountain in Shintaro Mountain.[4]

Clutch had a competitor named Hageman, who he held in high regard.[3] At one point, Clutch supposedly went to a pyramid, found one of the four Fangblades, and turned it into the Blade Cup.[5] Clutch later on obtained an Amulet of Protection and was told from someone that it could protect him from danger, even though Clutch wasn't sure to believe him or not.[3] Eventually, Clutch stopped exploring for ten years.[3]

He discovered the pyramid in the Desert of Doom and was interviewed by Gayle Gossip, who asked him about what was in the pyramid and he replied stating that he is not going inside because there are booby traps only a ninja could survive.

The ninja came to him and asked him to help them enter the pyramid and he refused. At that moment, his intern, Dwayne, alerted him to a call from Cecil Putnam, saying that his membership had expired because he had not explored in over ten years. Clutch then decided to help the ninja enter the pyramid, he helped the ninja get past a simple suspension bridge. He then told the ninja not to touch a cobweb because it was a trick wire, However, Jay kicked it, causing Clutch and the ninja to fall down a ramp into a room full of spikes. Kai used his fire to destroy several spikes allowing them all to survive before coming across the skeleton of one of Powers' competitors who never came across the chapter of spikes in his book. Cole then used his super strength to let them get through a closing door and into the tomb of Aspheera. They found a wall with a puzzle of the Snake Sorceress and Jay and Nya finished the puzzle releasing her. While the ninja fought Aspheera, Clutch Powers escaped and went outside the pyramid where he was confronted by Aspheera, he taunted her with an ancient Minkan Amulet of Protection. The Snake Sorceress used magic to cause the pyramid to erupt. Clutch then jumped off the ledge of the pyramid and slid down the side. He was then launched toward Ninjago City on a rock.

Clutch landed in Ninjago City and was found by Nelson and Antonia who asked him what happened and he weakly told them that the ninja were in trouble. He was injured in the accident and was carried off in an ambulance. Knowing this Nelson and Antonia went to the Monastery of Spinjitzu and warned Wu.

At the hospital, it is shown that Clutch has a concussion and a broken leg before asking a nurse to raise his bed. Later, while writing a memoir, Lloyd, Nya, and Zane visit him, requesting his help on finding the second Scroll of Forbidden Spinjitzu, but after telling them that it was with the Explorers Club, he refuses to help them further, going as far as claiming he was feeling lightheaded, causing the nurse and some orderlies to kick the three ninja out, clicking his tongue at the angered Lloyd.

While walking on the streets in Ninjago City, Clutch Powers discovers the Teapot of Tyrahn.

Clutch Powers watched Jay while he was on the Blue Dragon.

Shortly after the return of the ninja and Wu from Shintaro Mountain, Misako decided to go and confirm her theory about the Island of the Keepers and navigate the storm belt, so she traveled to the storm belt with Wu and Clutch Powers with his interns. However, when they went to the island, they were hit by storms and were wrecked on the island. Later, they set up a tent and made a large HELP sign out of stones in case someone went after them. Shortly afterwards, they went to the jungle to explore the island.

Clutch, Misako, Wu, Dwayne and two of his interns move along the jungle before he reprimands his interns for nearly damaging his tanning bed, since it costed him a lot of money he made from selling books, much to the annoyance of Wu and Misako. Later, he complains about having chopped vines all day and gives Dwayne his machete before continuing onward, until they come across a Stone Golem, which scared off his interns, and his tanning bed. When it comes to life, they all attempt to escape, but the golem soon surrounds them.

When the ninja are sent to a cell, they meet up with Wu, Misako, Clutch Powers, and the interns. After Lloyd freed the group, Clutch Powers and Dwayne attempted to steal the Storm Amulet, but are caught and later tied to a wooden pole.

Dwayne cuts Clutch free before he uses the ninja's diversion to steal the amulet and attempted to take one of the ninja's catamarans, only to be caught and electrocuted by Nya, and tries to feign innocence, claiming he didn't know the amulet was in his bag.

Although Nya stopped him in a robbery, he managed to steal the Storm Amulet and replace it with a fake. Clutch then proceeded to take it to the Explorers Club, where he was accepted back as a member.

At the Explorer's Club, Clutch Powers lied about his deeds during his quest to find the fabled Storm Amulet and was nominated for Explorer of the Year. He was soon confronted by Cole, Kai, Wu, Misako, and Ray who demanded Clutch to them back the Storm Amulet. Clutch once again tries to feign innocence when Kalmaar barged into the Explorers Club and demanded the artifact. Clutch immediately handed Wu the Storm Amulet and runs away terror. His peers decided to revoke his nomination due to his cowardly behavior.

Clutch was running away from the Explorer's Club right before Kalmaar and the Maaray Guards left with the Storm Amulet.

Clutch was present at Nya's memorial.

Clutch attended to the premiere of his movie, Clutch Powers: A Musical Life. While being interviewed by Gayle Gossip, he uses the Teapot of Tyrahn to wish for everyone in Ninjago City to see his movie.

Clutch was running across the street ending at Ninjago City Hall with the Teapot of Tyrahn.

Clutch was with the Teapot of Tyrahn, running out of the way from the Noodle Truck of Crime.

While in earlier seasons it is implied that he was a hard working explorer, Clutch now acts differently from the man he used to be. He is shown to be lazy, as he didn't want to explore the pyramid in the Desert of Doom until he realized that his Explorer's membership would expire. Clutch is also very self-centered and occasionally abusive, like when he made one of his interns act as a seat. His narcissism can be seen in "Riddle of the Sphinx", where he claims that he led an expedition to the Island of the Keepers, saved the ninja and fought off a serpent. As seen with his drawings, he also made it so that Mammatus gave him his crown and the ninja would bow down to him, which also shows a rather childish side to him.

Clutch can be unreasonable at times and even cowardly and selfish. When Aspheera attacked the ninja, Clutch escaped, claiming he was going to get help. His selfishness is shown in "Under Siege" when Lloyd, Nya and Zane came for his help to retrieve the other Scroll of Forbidden Spinjitzu at the Explorer's Club, Clutch refused to get out of bed since his leg was broken, although he claimed that he wouldn't go with them anyway, showing that he was fine with the destruction of Ninjago City. His cowardice is further shown when Kalmaar attacked the Explorer's Club and demanded the Storm Amulet, which Clutch handed over to Wu without a second of thought and ran away screaming as the ninja and the other members of the club fought off Kalmaar and the Maaray Guards.

He can also be incredibly ignorant and impulsive, as he continuously attempted to steal the Storm Amulet all for the stake of his status as an explorer, even though the results would end in disaster for him and his "allies".

Despite his many flaws as an explorer and overall as a person, Clutch does seem to contain vast knowledge about exploring and is surprisingly cautious at times. Most notably when he was exploring the pyramid with the ninja, he knew if there were traps in the area and told the ninja to stay aware. He was also considerate enough to attend Nya's memorial, appearing sad at her disappearance. 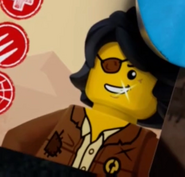 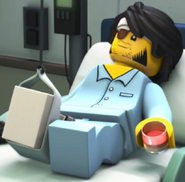 Clutch near his competitor's skeleton.

Holding the Amulet of Protection

Clutch getting blasted away on a rock from the pyramid.

Clutch with the Teapot of Tyrahn