The Earth Mech was a Security Mech that had fallen under the control of the Digital Overlord. Cole soon hacked it with his Techno Blade and transformed it into the Earth Mech.

When all technology of New Ninjago City was under the Overlord's control, the Ninja hacked vehicles with their Techno Blades. Cole hacked a Security Mech, turning it into his own Earth mech. When they were leaving New Ninjago City, the Earth Mech combined with Jay's Lightning Offroader and together they became the Thunder Raider.

After the Ninja left the city, they found a forest near Master Garmadon's Monastery. The Ninja hid their vehicles and Cole used a tree to hide the Earth Mech. It was later seen assembled as the Thunder Raider to escape, but all four of the vehicles were shot down by General Cryptor's Destructoid. Luckily, that was the plan, and the vehicle was on auto-pilot.

When the Ninja were in the mission to stop the Digital Overlord, Jay, Cole, and Zane summoned the Lightning Offroader, the Earth Mech, and the NinjaCopter to get to the top of the digital Borg Tower.

Jay, Zane, Cole, and Lloyd used their vehicles on a mission to save Kai, who had been captured by Pythor. They used their Ninja vehicles to get to the Lost City of Ouroboros.

When the Ninja were coming back from space, P.I.X.A.L. sent the Earth Mech alongside the Lightning Offroader to meet with Cyrus Borg at the Temple of Fortitude. When Nya was shot down, all five Ninja went to save her but they were soon ambushed by the Golden Master, who used Golden Power Spinjitzu to suck in and damage the Earth Mech and the other Ninja vehicles.

The mech was eventually salvaged by the Ninja and Cole used once again to ascend the Wailing Alps to get to the Cloud Kingdom. Unfortunately, Bansha caused an avalanche and the mech was destroyed in it, though Cole managed to escape in time. 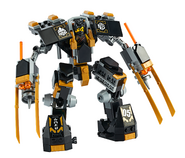 The combined Thunder Raider
Add a photo to this gallery
Retrieved from "https://ninjago.fandom.com/wiki/Cole%27s_Earth_Mech?oldid=515563"
Community content is available under CC-BY-SA unless otherwise noted.