Cole's Family is the family of the Earth Ninja. It currently consists of Cole and his father, Lou. 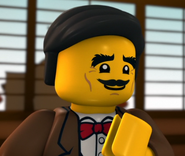 Previous Earth Master (Cole's Grandfather)
Add a photo to this gallery
Retrieved from "https://ninjago.fandom.com/wiki/Cole%27s_Family?oldid=384749"
Community content is available under CC-BY-SA unless otherwise noted.