View source
watch 01:36
We're Getting Mutants in the MCU - The Loop
Do you like this video?
Play Sound
“Time to get down and dirty, ninja style.”
— Cole

Fred Armisen
Cole is the sarcastic Earth Ninja, and one of the six Ninja trained by Master Wu in the Secret Ninja Force. He drove the Earth Mech.

At an unknown point of time, Cole joined the Secret Ninja Force along with his friends, Lloyd, Kai, Zane, Jay, and Nya, and became the Earth Ninja.

He has black eyes, bushy eyebrows and long black hair sometimes tied in a man bun.

Cole is the only Ninja who does not have sleeves on his Ninja gi. He also has bracelets on his wrists. His gi is tied by visible string and looks slightly different to most other gi.

Cole is sarcastic and he possesses a strong passion for music, to the point where he even enjoys the sound of Wu's flute. He is also described as a "man of a few words."

Cole wields a hammer in the trailers, but he may be skillful at using other weapons.

He is a skilled DJ.

He and the other Ninja have Elemental Powers like their TV counterparts, allowing him to create and control stones and shockwaves. Cole's vehicle, however, doesn't have weapons that are earth-based, unlike how Kai's mech has a flame thrower in it. Instead, he uses his records to fight off the Shark Army

Like the other Ninja, Cole is a Master Builder.

A ninja who loves to move and groove, Cole is never without his music. He even likes to hear Master Wu play the flute. Cole’s mech has built-in turntables and a powerful sub-woofer, creating waves of intense sound to seriously rock his opponents and blast their mechs into pieces, not to mention shatter the windows of nearby cars and buildings.[1]

The master of earth and a keen sense of music, even his subwoofers have woofers. Cole might seem too cool for school but it's not true, he is actually the most grounded and stable of all the ninja.[2] 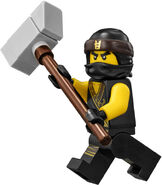 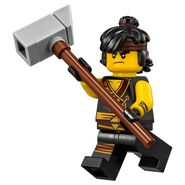 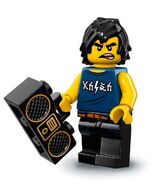 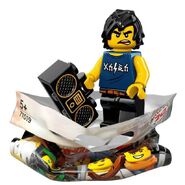 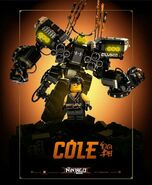 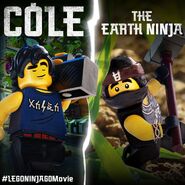 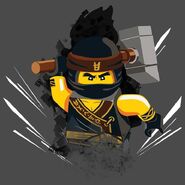 Cole in the credits 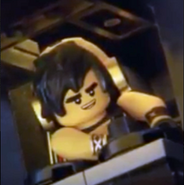 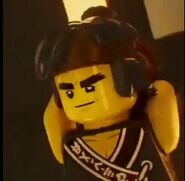