Comet Crisis is a Ninjago: Masters of Spinjitzu book that was released in September 2014. Based on the Season 3: Rebooted episodes about the Delta V comet, the story takes place between the events of "The Void" and "The Titanium Ninja."

The Masters of Spinjitzu are stuck on a comet, having traveled through space to save the World of Ninjago from the Nindroids. As they race through the stars, it becomes apparent that they are not alone on the comet. Something has stowed away . . . Something not of their world. . . .[1]

The five ninja are stranded on an asteroid after failing to stop General Cryptor and his Nindroids from securing the remains of the Golden Weapons. Jay is attempting to repair their damaged vessel, while the other ninja-particularly Kai-are frustrated by their predicament. Kai goes off on his own, unconsciously stirring up a strange green mist; when Cole encounters him later he behaves strangely. He later knocks a scanner Cole was using out of his hand, resulting in its destruction, right as Cole was telling him about some alien life form readings they had detected.

The ninja are later troubled when a vital component for the ship goes missing and appears in Cole's possession, making it seem as though he is sabotaging their escape effort. Cole proclaims his innocence but flees to avoid capture, and is then attacked by Kai, who seems to think that Cole attacked him. Eventually the ninja realize that there is an intruder in their midst who is able to change their shape with incredible accuracy, and that this intruder is attempting to prevent their departure. After he impersonates and abducts Jay, the other Ninja are forced to follow him and come across a series of ancient ruins.

Confirming their suspicions, the intruder informs the ninja that the asteroid was once part of a planet that was destroyed. After finding a warning against "The One Who is Many", the shapeshifter reveals himself and admits that the planet was destroyed because he used his powers to turn its inhabitants against each other. Realizing that the villain will not let them leave, Zane offers him a deal: defeat Zane with his own powers, and the ninja will remain. However, Zane's gambit is a ruse, as the shapeshifter finds himself unable to take on Zane's form due to the White Ninja's robotic nature. The ninja then escape, collapsing the ruins atop their foe, and hurry to complete preparations for their return home before he can escape. 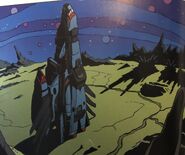 The four alien races shown in the story.