Condrai Buggies were small compact buggies primarily used by Chen's forces to get around the island. With built-in suspension and big rubber tires, the Jungle Raider is able to drive through even the roughest parts of the jungle like a breeze. Should one encounter any foes, it is armed with powerful dual shooters.

The Anacondrai Warriors used several Condrai Buggies throughout the Tournament of Elements and during the Second Serpentine War.

When Chen's forces were alerted to the presence of the D.B. Express by Dareth, one of the thugs chased after him in a buggy when he fled. During the chase, Dareth destroyed part of the cliff face which landed on the narrow canyon road, causing the buggy to drive off the edge and get destroyed.

After the Elemental Masters took control of the island, they found a buggy and claimed it. When the Ninja left in search of Skylor, Zane piloted the buggy to aid in the search until he crashed it due to driving too fast.

A buggy was used by Chen's army during the battle at the Corridor of Elders, though was destroyed by the anchor of the Destiny's Bounty 2.0.

The Condrai Buggies were small dune buggies. Their main chassis was light brown with white and purple details, styled to resemble a snake's head. The wheels were large, black, and lined with thick treads. It also had a tail-like structure on the back of it. 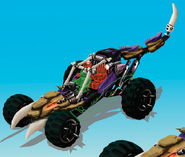 Concept art
Add a photo to this gallery

Add a photo to this gallery
Retrieved from "https://ninjago.fandom.com/wiki/Condrai_Buggy?oldid=506782"
Community content is available under CC-BY-SA unless otherwise noted.