Condrai Crushers were small, offensive, and weapon-supplied vehicles. Resembling the head of a snake, they were used by Chen's followers while on his personal island and also as attack vehicles during the Second Serpentine War.

When Cole and Jay began faking their fight during the tournament, Chen quickly caught on and ordered four Condrai Crushers driven by his followers to continue the conflict and start up the action. Working together, Cole and Jay managed to easily defeat the Crushers. One was stopped by Jay, who electrocuted the driver, while another crashed into the wall of the coliseum. Cole threw one Condrai Crusher at the fourth one, destroying them both. Despite their victory over the Crushers, Cole lost the round and was sent to work in Chen's Noodle Factory.

The Anacondrai Warriors chase after Dareth in the Condrai Crushers.

When Chen freed Skylor from her chains, she immediately sprang into action and escaped on one of the drones. Chen quickly told Eyezor and Zugu to pursue her using Condrai Crushers, before commanding Kapau and Chope to do the same.

Two Condrai Crushers piloted by fake Anacondrai were present in Jamanakai Village when Chen arrived in the Roto Jet, claiming victory over the village.

During the battle at the Corridor of Elders, Chen's army used the Condrai Crushers in battle, but they were all destroyed by the anchor of the Destiny's Bounty 2.0.

When the villains have been resurrected, Chen called for the Anacondrai Warriors. They took control of the Condrai Crushers and went for Nya and Kai, but were defeated.

In Kai's retelling of the events on Chen's Island, they were chased by Chope piloting a Condrai Crusher during their journey to the Anacondrai Temple.

The Condrai Crushers are equipped with three main abilities and functions. The first primary function is to grind, or "crush" anyone in the way of the twin grinders at the front of the vehicle. The grinders themselves consist of three large stone blades spinning at quick speeds. The second ability is a whipping-tail attached to the end of the vehicle, and the final function uses dual missiles hidden in the Crusher's mouth. 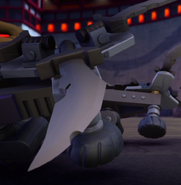 In Shadow of Ronin
Add a photo to this gallery
Retrieved from "https://ninjago.fandom.com/wiki/Condrai_Crusher?oldid=515951"
Community content is available under CC-BY-SA unless otherwise noted.