When mixed with the anti-venom of the other four Snake Staffs, a white liquid is formed that creates a map to the Fangblades.

Skalidor used his staff to fight Pythor. After being defeated, Pythor grabbed all the staffs and threw it to the ground, asking all the Serpentine to bow to him as their new king.

Skalidor had his staff while he was in the Serpentine's underground fortress.

Skalidor had his staff while he was hiding from the Great Devourer.

Skalidor used his staff to fight the ninja.

Skalidor had his staff while he was talking to Garmadon.

Skalidor had his staff while he and the Serpentine were inside the Ninjago Museum of History.

Skalidor was holding his staff while talking to Garmadon.

Belongs to the Constrictai General, Skalidor. Holds a vial of anti-venom which lets you breathe again if you have been squished by a Constrictai.[link unavailable]

Snake staff of the Constrictai tribe and a symbol of the power of the Constrictai general. It is designed to look like a snake wound around a pole, with the black and white symbol of the Constrictai on the snake’s chest. It is one of five staffs in existence, one for each Serpentine tribe. Concealed within the staff is a vial of anti-venom, which allows the user to continue breathing even when caught in the coils of a Constrictai. When the anti-venom is combined with that of the other four staffs, it creates a white liquid which provides a map to the location of the Fangblades.[1] 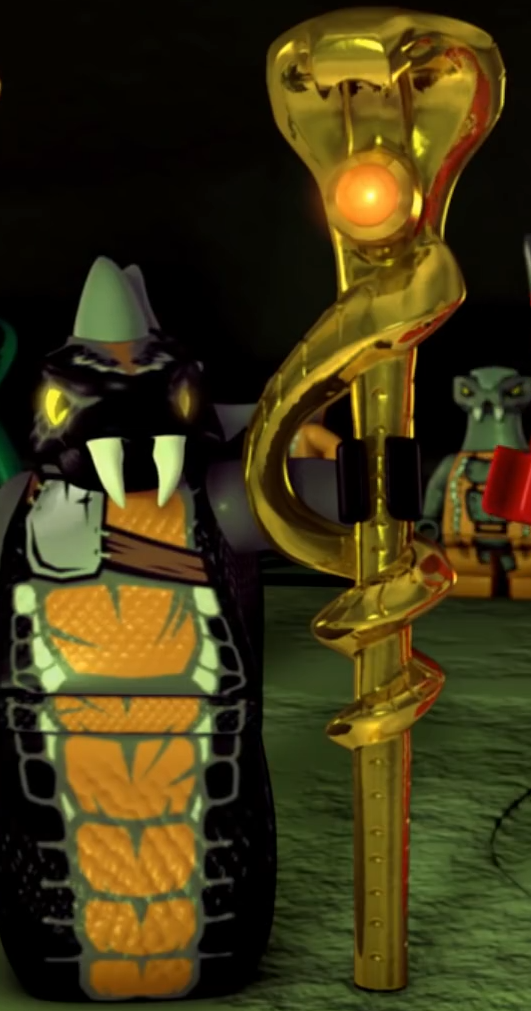 The staff dripping among the other staffs