Dr. Cyrus Borg is the head of Borg Industries. Inspired by Dr. Julien's brilliant expertise, Borg built Borg Tower and commencing a more advanced future. During the Nindroid Conflict, Borg was threatened by The Overlord's consciousness and corrupted into a semi-mechanical entity, which The Overlord took possession of for some time. Borg was later saved by the Ninja, who used some of his technology in the ensuing chaos. Following the supposed demise of Zane, Borg commemorated the fallen Ninja and began to realize that technology wasn't the answer for Ninjago's problems.

Over the years, Borg remained a loyal ally of the Ninja and witnessed such events as the Second Serpentine War and Morro's struggle with the Ninja. During this time, Borg produced several vehicles for the Ninja to use against Morro and his cursed allies. After the Time Twins returned to Ninjago, they captured Cyrus Borg and forced him to build an apparatus capable of traveling through time. Though Borg succeeded, the Ninja ultimately thwarted the Twins' plans, though Master Wu was lost as a result.

Cyrus Borg took the opportunity to use the destruction of Ninjago City as a way to rebuild this city as a technological marvel known as "New Ninjago City." He founded Borg Industries and built Borg Tower over the site of the destroyed Garmatron as a symbol of defiance towards evil. A few weeks before the visit of the Ninja, Borg discovered a virus that turned out to be the Overlord inside the master computer. Knowing he could not stop the evil on his own, he created the Techno Blades and Techno Robes for the four Ninja.

Cyrus summons the Ninja—minus Lloyd to Borg Tower where he discreetly gives the Ninja the Techno Blades inside a statue of himself. The Digital Overlord finds out about his deed however and fits Cyrus with cybernetic parts that turn him into the Overlord's slave. Cyrus' walker then becomes the Digital Overlord's primary conveyance.

Cyrus' transport continues to serve as the Overlord's "body," while Cyrus himself appears limp and unresponsive.

With New Ninjago City without power, Cyrus was freed from the control of the Overlord. A few days after the blackout, a crew of engineers stumbled across Cyrus's body in the Borg Tower assembly line and removed the headpiece that had previously been installed to revive him. Once back in his old wheelchair, the inventor hurried back to his office and was dismayed to find both the hard drive containing the Digital Overlord and the recently captured Master Wu missing.

Upon the Ninjas' return to the city, Cyrus welcomed them back, after assuring the other inhabitants who had not left that the Ninja team was there to help. Much to his surprise, his assistant P.I.X.A.L. was with them, powered by half of Zane's power core. He then rushed her back to Borg Tower where he was able to use her energy to get his mainframe up and running again.

P.I.X.A.L. informed her creator that while she felt indebted to him, she also felt a powerful connection to Zane. Cyrus assured her that she didn't belong to anyone and that if she desired to go with Zane, then that was her choice. He was then startled as his scanners detected Nindroids in close proximity, and confused by their absence. P.I.X.A.L. realized what he had not; the Nindroids were underground beneath the building.

After explaining the Ninja could reboot the system in the Digiverse, he sent the Ninja off. Later, he was attacked by his artificial limbs and was captured, leaving Nya and P.I.X.A.L. to defend the Ninja.

Re-assimilated back into the OverBorg, Borg freely began building a rocket for Pythor and the Nindroids to use to retrieve the Golden Weapons.

After Pythor got word from Cryptor that the Ninja were aboard the Arcturus rocket, the OverBorg accompanied the Anacondrai and several Nindroids to Borg Tower to capture the Ninja's allies who were aiding them. The company arrived at Borg's office and though it appeared deserted, the OverBorg discovered Wu, Garmadon, Nya, and P.I.X.A.L. hiding on scaffolding outside the office window. Using his laser eye, the OverBorg began to cut the wires holding the scaffolding, though the heroes were able to escape in a Hover-Copter.

Following his return to Ninjago, Borg was reverted to his normal self, as the Overlord—now the Golden Master—said he was no longer needed. Later on, he told the Ninja about a shrinking pill that will reduce the size of the Golden Master. When Zane sacrificed himself to destroy the Golden Master, Borg spoke at the memorial dedicated to the heroic Nindroid, where he dubbed him "the Titanium Ninja" for his heroism.

Cyrus was present to watch Lloyd run a training course to try and obtain a replica of the Golden Armor within Borg Tower.

Borg broadcasted a radio warning about the Anacondrai's attacks, which was heard by Pythor and inspired him to help the Ninja.

Borg at one point created the Titan Mech and gave it to Zane for use on the Wailing Alps.

After Morro obtained the Realm Crystal to unleash the Preeminent, Wu sold his tea shop to pay Borg to create some artillery against the ghost army. The inventor eagerly accepted the challenge and created the Blaster Bike, the Jay Walker One, and an upgraded version of Titan Mech. Unfortunately, he lost track of time and thus could only create Kai a headband and had nothing for Lloyd, even doubting he'd come back. He then met the Ninja at Steep Wisdom where he presented them with their new vehicles, noting how much they had all changed.

By the time of Nadakhan's escape from the Teapot of Tyrahn, Borg had created an interactive kiosk system in Ninjago City that the Djinn encountered. It was from this that Nadakhan learned of the whereabouts of his Sky Pirate Crew and the fate of his beloved Dilara, as well as the fact that the Realm Crystal was protected by Master Wu.

When Nadakhan broke the pedestal of the Realm Crystal's hologram, Cyrus says it needs to be repaired.

Nadakhan then transformed into Cyrus and tells the White Nindroid Forces the Realm Crystal needs to be protected.

The following events occur after Jay made his final wish, and, thus happened.

At some point following the Overlord's defeat, Wu brought the components of the Golden Mech to Borg, who rebuilt it. This would later prove key to defeating the plans of Clouse on The Dark Island.

Cyrus gave a speech about the invention of the BorgWatch but was the target of a Vermillion Warrior. Zane tried to escort him to safety but was kidnapped.

The Vermillion put Cyrus in the golden sarcophagus, and after it's been open, Kai was surprised to find out Krux kidnapped him. Eventually, Acronix kidnapped him again.

Now located in the Vermillion Dorm of Doom, Cyrus was forced to build the Iron Doom's apparatus but claims he can't due to the unusable metal and tools. However, Krux caught on to his lie, and after Machia motivated him, he agreed to build it.

Cyrus claimed he finished making the apparatus. He tried to sabotage it, but Machia took him with them to find the Pause Time Blade.

When Zane got a signal, he realizes it's Cyrus and stated he needs to save him. When they got there in disguises, he showed them the Iron Doom.

Later, when he was trying to figure out the code to disable it, Zane figured it out. However, Acronix used the Pause Time Blade on them and the Ninja had to catch them.

There is nothing the team can do but wait for Kai, Nya, and Wu's return. Eventually, they start to notice the city has no technology and that Zane has gone back to his original state. When technology returned, Cyrus was ecstatic his BorgWatch came back.

During Emperor Garmadon's rule over the city, Borg Tower was used as his headquarters, meaning Cyrus Borg was either expelled or arrested by Sons of Garmadon. After the city's liberation, Cyrus Borg assists in restoring the city to its normal state.[1]

Cyrus was seen next to the Police Commissioner while they wait for Cole, Zane, and P.I.X.A.L., who arrive late for the unveiling of the rebuilt Destiny's Bounty. Later on, when the dark mist started coming out from the Realm Crystal, a guard attempts to wheel Cyrus to safety.

It was shown that he was petrified and frozen in Ninjago City when Lloyd and Garmadon stumble upon him. Garmadon would not let Lloyd help him, saying that the only way he could be helped was if the Realm Crystal was destroyed.

When the Oni were banished from Ninjago City, the darkness fades away, freeing those frozen, including Cyrus. He is later seen up at the monastery, watching the Ninja place their hands on a new mural.

The Ninja and P.I.X.A.L. visit Cyrus, who had been studying the Prime Empire cabinet that Jay went through before discovering there was a world in it, with the latter and over 800 other players trapped inside it. When The Mechanic, Ultra Violet, Soto, and many other escaped Kryptarium inmates infiltrate the building to reclaim the cabinet, Cyrus shuts down the elevators and activates his security system while silently mocking Milton Dyer's security system, telling the Ninja not to interfere and to concentrate on the game. Once they arrived, the Ninja try their best to keep them away from Cole while Cyrus stayed back before Cole managed to reach Level 13, and Lloyd, Kai, Jay, Cole, and Nya head in while Zane and P.I.X.A.L. stayed behind. As they prepare to leave, one convict blocks his path, but Zane forces him aside before they head for the elevator to reach his private helicopter.

Firstly, Cyrus Borg was seen wearing a formal blue-gray jacket over his black turtleneck sweater. When the Overlord made him into the OverBorg, he was not seen with his jacket, but in place, robotic pieces on the right side of his body. He is always in his wheelchair or in his spider-like chair that he made. Starting from the fourth season, Cyrus has a gray suit and black sweater, jet black hair usually combed over to one side and crow's feet around his eyes which have grey glasses, while sitting in just a regular wheelchair, but now his right arm is robotic because of his OverBorg's form.

A skilled and imaginative inventor, Cyrus Borg saw the damage done to Ninjago City by the battle with the Overlord as an opportunity. He rebuilt the place as New Ninjago City, packed with high technology upgrades, and built the Borg Industries complex right on the site of the Overlord’s defeat.

Borg’s successes have been many, but his few failures have been spectacular as well (the electronic papercut carving set, the electric bath mat, the nuclear toothbrush, the turbo-jet powered, sub-orbital golf cart, etc.).

“When I make a mistake, I make a big one!” he has been known to say. 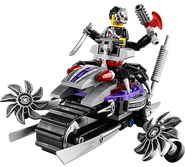 Cyrus Borg in the Over Borg attack. 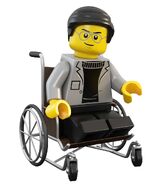 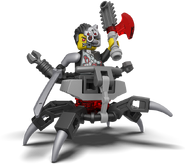 Cyrus Borg in the Rebooted mural.

Cyrus Borg in the Hands of Time mural.
Add a photo to this gallery

Cyrus in his mechanized chair.

Cyrus before being corrupted by the Digital Overlord. 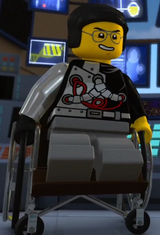 In Season 4: The Tournament of Elements 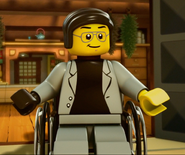 In Season 7: The Hands of Time

Cyrus Borg in Season 10: March of the Oni

At the Ninja's Mural ceremony

Retrieved from "https://ninjago.fandom.com/wiki/Cyrus_Borg?oldid=448308"
Community content is available under CC-BY-SA unless otherwise noted.