“Well, then it's a good thing I made a mobile base in case the Destiny's Bounty was ever out of commission. I call it the D.B. Express! Mm, not married to the name.”
— Nya to Misako and Wu, "Versus"

Operational
The D.B. Express (Destiny's Bounty Express[1]) is a Ninja vehicle built by Nya for use as a mobile base. It is a large black and red vehicle that has a cloaking device. The D.B. Express was primarily used by Nya to search for the ninja when they went missing. It was briefly used by Chen but eventually reclaimed by the ninja.

Prior to the Tournament of Elements

Nya created the D.B. Express should the Bounty ever be out of commission again. It was stored in the Samurai X Cave underneath the control center.

On the second day following the ninja's mysterious disappearance, Wu decided to expand the search, and Nya revealed the D.B. Express. She used it to patrol the Sea of Sand until she met up with the Falcon. Nya then discovered that Zane's beacon was emanating for a distant Island and piloted the D.B. Express to New Ninjago City to find answers.

Upon reaching Ninjago City, Nya parked the D.B. Express in an alleyway adjacent to Chen's Noodle House while trucks unloaded the latest shipment of goods. As they drove back to the docks, Nya used the cloaking device to transform the D.B. Express into a noodle truck and sneak onto Chen's ferry. Dareth, however, jumped in, and together, they set off for Chen's Island.

Once on the Island, Nya hid the D.B. Express inside a cave behind a waterfall. While Nya went undercover as a kabuki, Dareth remained at the D.B. Express, relaying messages from the ninja to Sensei Wu. The Brown Ninja eventually grew bored and began jamming out, though, during it, he accidentally turned on the loudspeakers, broadcasting his music across the Island. Eyezor and a group of thugs soon located the D.B. Express's hiding place and after a minor problem with the cloak, Dareth piloted the vehicle through a canyon road to escape. Eventually, the autopilot was activated, though it quickly crashed the D.B. Express when it neared the road's end.

With Dareth captive, Chen took control of the D.B. Express and broadcasted the objective of the next event from the vehicle to the blimp that the contestants were in. During the event, Chen used the D.B. Express to get around the Island, monitor the events, and capturing the Elemental Masters and locking them away in its prison.

Nya reclaimed control of the D.B. Express once the Elemental Masters escaped the noodle factory and used it to update Wu and Misako on the situation. When Griffin Turner arrived reporting that Skylor was in danger, Garmadon ordered the ninja to find her, and Nya operated the D.B. Express in the search. However, she only discovered Eyezor and Zugu trapped in the wreckage of three Condrai Crushers and used the D.B. Express to transport them back to the palace.

When the ninja left the Island on their Elemental Dragons in pursuit of Chen's army, they left the D.B. Express on the island.

In Kai's retelling of the events on Chen's Island, the ninja rode in the D.B. Express to the outskirts of a temple where Cole crashed the vehicle while trying to stop.

The D.B. Express is a red truck-like vehicle with tinted windows. It has a cloaking device for stealth and an autopilot. The interior features an advanced computer system with video and audio transmission capabilities. A prison cell is also located at the back of the vehicle. 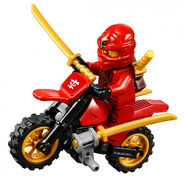 Dareth in the computer room

Dareth and Auto in the cockpit

In Choose Your Ninja Mission