You may be looking for their real-life counterparts.

Dan and Kevin Hageman are screenwriters in Ninjago who Dareth knows.

Dan and Kevin were at the cinema watching a Fritz Donnegan film when they got interrupted by Jay and Cole arguing. The two glared at the group, warning them to be quiet. Eventually, they begin to throw popcorn at the group when Nya's communicator goes off.

The two attended at Yang Tavern and watched Kai take on Kruncha in a Slither Pit match.

Dan and Kevin were two prisoners locked up in Kryptarium Prison trying to dig their way out by using a spoon. Soon after, Cole came running and broke the wall in an effort to escape, to which the brothers yelled "Thank you!" The reason the two got locked up is unknown.

Still in prison, the brothers listened to Cole's speech about fighting the Anacondrai Cultists.

As the ninja were being taken to their cells, the prisoners, including Dan and Kevin, were demanding for fresh meat.

Dan and Kevin Hageman were screenwriters hired by Dareth to help the ninja formulate a plan to infiltrate the Sky Pirates. The two suggest the group utilizes "Movie Magic" to make the infiltration easier. However, Ronin shot down their ideas, claiming that they were idiotic. 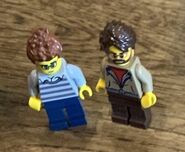 The real brothers with their minifigures

On the rightmost area

To the right of the leftmost lanterns

Right next to the top-right lantern