Ninjago Wiki
Register
Don't have an account?
Sign In
Advertisement
in: Books, Ninjago, Ninjago: Masters of Spinjitzu,
and 3 more

Dark Island Trilogy, Part 1 is a book released in 2016 and written by Greg Farshtey. Its plot takes place before "Day of the Departed."

After the events of Skybound, a new darkness threatens the Ninjago universe. Fishermen vanish from the seas, a violent storm brews off the edge of Dark Island, and Master Wu senses a growing imbalance between good and evil. When Misako and Ronin disappear, they leave behind one clue—a warning to stay away.

While returning from the Dark Island, having discovered a sinister plot, Misako and Ronin dwell on their findings before being ambushed by a crew of pirates under the cover of a storm.

Master Wu, while meditating on the past victories of the Ninja, recalls recent events of fishermen disappearing out in the Endless Sea, an incident which prompted Misako to investigate, accompanied by Ronin. However, his meditations are soon interrupted when a villager reports Misako's ship, having been found wrecked on the coast and abandoned.

Concerned, Wu gathers the rest of the ninja, training in the Samurai X Cave, to help him. Investigating the ship, he discovers a message hidden by Misako, just before she was kidnapped- a message warning him of pirates, and more importantly, telling Wu to stay away from the Island of Darkness at all costs. Undeterred by Misako's warnings, Wu and the Ninja gather on the Destiny's Bounty and fly off, with Wu noting of a secret crate that the Ninja are told as containing nothing more than tea, knowing it contains a secret that can help stop the evil he senses. However, while en route, a massive storm appears and wrecks the ship, scattering the Ninja and sending them crashing to the Island of Darkness below.

Kai, recovering from the crash, discovers himself marooned in the middle of a desert. Likewise, a hurt Wu wakes up in the jungle and finds the wrecked Bounty, only to encounter Lloyd, fleeing from a group of unusually-aggressive apes emanating a purple aura. Getting trapped alongside his nephew in a pool of quicksand during the chase, the two manage to escape using Spinjitzu, and charting a course of action, repair the Destiny's Bounty with natural materials. Setting sail on the River of Darkness, the two sail towards the Temple of Light, with Wu's intuition telling him that the Temple of Light is the key to these events, even as he writes his thoughts in his journal. As he writes, he begins to realize that the Dark Matter once long-buried has begun to return in greater abundance once more, infecting the earth, water, and even air of the Island of Darkness.

Jay wakes up along the coast and eventually meets up with Nya, who notes the presence of spare parts, indicating someone has been building lately. Wandering along the shore in search for their friends, the duo comes across Flintlocke, Doubloon, and a few other Sky Pirates detaining a struggling fisherman. Wondering how they could've come together after being scattered by Jay's final wish and likewise pondering Nadakhan's whereabouts, the two quickly come to the aid of the prisoner. Surprising the Sky Pirates, they quickly defeat the group, only for Ronin to come across the two.

Jay, initially suspicious of the mercenary, is interrupted when the Leviathan, emanating a purple aura, attacks the thief. Working alongside Nya, the two free Ronin from the beast's grasp, even as the defeated Sky Pirates retreat with their prisoner in tow. Ronin, escaping back into the jungle, returns with his Salvage M.E.C., a massive machine constructed from scrap and other parts he discovered while exploring the island. Firing at the Leviathan and scaring it off, Ronin explains to Jay and Nya how he and Misako were attacked by the Sky Pirates. Despite his best attempts, Ronin was sent into the ocean by a rogue wave and eventually drifted onto the shore of the Island of Darkness, where he wandered and eventually built the Salvage M.E.C. before finding the two.

Mystified by the events, the trio sets off to find Misako and the rest of their team, even as a worried Wu expresses concern over the influence the Dark Matter might be having on his friends. 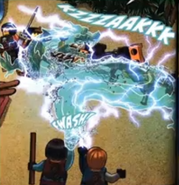