The Ninjago world is about to be changed forever. As Wu and the ninja race to halt the coming darkness, they must band together and prepare to stop the unstoppable. Will their Spinjitzu and mastery over the elements be enough to stop the end of the world? Will the united power of the ninja be enough this time? And what does Master Wu know about his own ultimate destiny?

Stranded in the Billy Badlands, Kai, wandering the desert, encounters a trio of Sky Pirates driving a Rock Roader and Raider Bike. Exhausted from the desert trek, Kai is quickly captured and tied in front of the Rock Roader as a hood ornament, before eventually being bound on the ground as the group stops to set a campfire. Desperate, Kai finds himself freed by Cole, who uses his ghostly powers to free his friend and frighten the thugs into complying, with help from Kai.

Interrogating the pirates, Kai and Cole learn of Clouse's plan to corrupt the Temple of Light with Dark Matter and plunge both halves of Ninjago into darkness. Mortified, the two make haste, commandeering the Rock Roader and Raider Bike and cleansing the vehicles of dark influence with their Elemental power. Driving the vehicles, the two sensing the presence of the final trove of Dark Matter being transported and tracking it down. After being attacked by a hand of sand animated by the darkness, the two encounter Clouse atop the Misfortune's Keep, flying alongside several trucks, Rock Roaders, and Raider Bikes, all manned by Sky Pirates and carrying Dark Matter. Attacking the convoy, the duo succeed in delaying and frustrating Clouse, who has his minions fight back, only for Misako, Ronin, and the others to arrive as backup.

Both sides clash, with Kai attempting to attack Clouse directly with a Spinjitzu tornado, only to be downed with a dark blast, even as Nya and Dogshank fight once again. Nya, recalling their previous alliance, reaches out to Dogshank and attempts to persuade her to join forces with the ninja, but Dogshank, evidently influenced by the darkness of the island, lies about accepting her offer, keeping a sword behind her back, only for her ruse to be seen through by Nya, who retaliates. Clouse, frustrated, uses his magic to summon a sandstorm, giving him and the Sky Pirates cover as they flee to the Temple of Light.

The Ninja, pooling their Elemental Powers together, manage to fend off the sandstorm, at the cost of Clouse gaining a massive head start. Meanwhile, Wu sailing the River of Darkness recounts in his journal his experiences with Kai, likewise noting the importance of both light and darkness as part of a balance, and is more certain than ever that it's his destiny to stop Clouse.

Arriving at the Temple of Light, Master Wu witnesses Clouse pour the last trove of Dark Matter against the Temple of Light's defenses, even as the Ninja catch up to the scene. Its defenses failing, the Temple of Light begins to go dark, and empowered by the energies, Clouse summons his Shadow Army once more to assist the Sky Pirates in preventing the Ninja from ruining his plans. Meanwhile, the energies of the darkness cause both halves of Ninjago to drift towards each other, causing natural disasters and panic on both islands as they near the embrace of total darkness.

Disheartened by the imminent doom and their seeming defeat, the Ninja are encouraged by the arrival of Wu, who asks them to keep Clouse's army at bay. Even as both sides fight furiously, Misako helps Wu open the crate, revealing the restored Golden Mech. Shocked, Misako asks how it has returned, and Wu, noting it was made to last, wields it to battle. Bolstered by the power of Light, Wu easily shatters through the barrier of darkness now surrounding the Temple of Light, confronting Clouse.

Clouse, angered, summons his Shadows to him, having them converge into a doppelganger of the Golden Mech, a Shadow Mech that he controls. Clashing with Wu, Clouse prematurely claims dominance for darkness, an arrogant illusion Wu shatters alongside the blade of the Shadow Mech. Destroying the shadows, Wu uses the power of the Golden Mech to disperse the darkness, purifying the Temple of Light.

Clouse, cursing Wu for interfering, realizes the presence of a vortex that begins dragging him in. Wu, showing leniency to the Ghostly Sorcerer, offers him help, but Clouse, having been driven mad by envy, anger, revenge, the Cursed Realm, Dark Matter, and his own ambitions, refuses, reasoning that he'd rather die than accept help from Wu, and lets himself be consumed.

As Light floods over the Dark Island, both halves of Ninjago drift apart back to their original positions. Defeated, the Sky Pirates are captured by the Ninja, who decide to send them to jail, as Clouse finds himself in the Underworld and surrounded by hostile Skulkin, ironically in the exact same position and fate that his nemesis, Garmadon, once suffered.

The Ninja proceed to celebrate, even as Master Wu explains how, following the battle with the Overlord, he brought the shattered remnants of the Golden Mech to Cyrus Borg, who repaired the ancient automaton, and hid it in case the balance between light and darkness was ever upset again. Triumphant, the Ninja rejoice.

Wu, writing his journal, recounts the lesson his father, the First Spinjitzu Master, taught him: That ultimately, there must be a balance, and thus notes that if the world must never be fought for, then it would lose meaning. Returning home, Wu takes pride in the Ninja, although notes that there will always be threats in the future.

Later that night, Wu, waking up, would be struck with a horrible nightmare. Recounting what he'd seen in his journal, Wu would recall his dream; Cryptic visions, such as that of Dr. Saunders, followed by the Hall of Villainy exhibit, its statues filled with more life than regular mannequins; Master Yang, dwelling in the shadows; the former masters of Fire and Water, Ray and Maya, in a pit of flame forging something terrible; and finally, the twins he thought lost to time, Acronix and Krux. Haunted by his visions, Wu decides that he must prepare for the inevitable future. 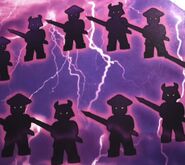