View source
watch 01:33
Recap: "Day of the Departed"
Do you like this video?
Play Sound

Were you looking for the holiday or the song?

“Yes, enjoy the fun and festivities. But never lose sight of the true meaning of the Day of the Departed. Today is about remembrance. We light lanterns to remember our ancestors, and to settle our debts.”
— Master Wu to the ninja

Day of the Departed is a Ninjago: Masters of Spinjitzu TV special, preceded by Season 6 and followed by Season 7. Cole was the focus ninja and mascot character, Yang served as the main antagonist, and Yang's students and several past villains' henchmen served as the villainous factions.

A teaser featuring the opening scene was released on August 18, 2016, while the official trailer was released on September 30, 2016. Day of the Departed aired on October 29, 2016, in the United States. It follows the ninja as they commemorate their ancestors and fallen friends on a sacred holiday. During this, Master Yang manipulates Cole into ushering in the return of the ninjas' arch-enemies—forcing them into an unexpected and dangerous conflict.

An alternate version of the episode, titled Attack of the Cursed Specters, was released on January 31, 2017, for several other countries such as China. This version is not in English and was produced by a different company than the original TV series. While it mostly focuses on the same plot, there are some differences that set it apart from the English version.

When Cole returns to Yang's haunted temple to seek revenge on the former Airjitzu Master, who turned him into a ghost, he accidentally uses a powerful Dark Magic blade that unleashes the spectral forms of Ninjago's greatest villains and traps himself in the temple! While Cole battles for his freedom, the ninja must return their ghostly foes to the Departed Realm before they gain the power to remain in Ninjago forever![citation needed]

On the Day of the Departed, the ninja hurriedly travel across the Sea of Sand, en-route to the Ninjago Museum of History. Upon their arrival, Wu reminds them of the holiday's significance: for remembering fallen ancestors and cherishing family. Dr. Saunders arrives, greeting Wu and the ninja before presenting the museum's new exhibit, the Hall of Villainy, which houses life-sized mannequins of the major villains fought by the ninja over the years, as well as a plaque describing the rare Yin-Yang lunar eclipse. Cole finds a painting of Master Yang, as well as the Yin Blade, which is on display. Cole calls out to Saunders and asks what the weapon is, but realizes nobody is paying attention to him. Cole hears Yang's voice imploring him to "close the circle." Realizing he's fading away as one of the departed, Cole takes the Yin Blade and sets off to face Yang.

The ninja divide for their own personal memorials: Lloyd and Misako commemorate Garmadon at the Corridor of Elders; Kai and Nya remember their mother and father at their blacksmith shop; Zane remembers his father in Birchwood Forest; Jay spends time with his mom and dad at their junkyard, and Wu goes to the old monastery to remember his father. Realizing everyone is out celebrating, Ronin decides to steal from the deserted houses. Cole arrives at the Temple of Airjitzu, which is still floating in the sky. Cole confronts Yang, who he attempts to strike with the Yin Blade but misses, instead of smashing it into an orb.

Consequently, the Departed Realm is opened, and the spirits of the ninja's old enemies escape while Cole is detained by Yang's students. The spirits possess five of the six mannequins in the Hall of Villainy, bringing them to life. Speaking through a painting, Yang tells the villains they can remain in Ninjago by slaying the ninja that defeated them. Pythor then enters the museum and joins the villains as they discuss who to go after. Chen chooses to go after Kai and Nya, Pythor chooses Lloyd, Cryptor chooses Zane, Morro chooses Wu, and Kozu chooses Dareth, which leaves Samukai with facing Jay. Pythor proposes they gather reinforcements from the Hall of Sidekicks to better have the chance of defeating their enemies.

Cole is imprisoned in Yang's temple, where he learns of Yang's history. Yang taught his students to master Airjitzu, and around this time he found the Yin Blade, which contains enough dark magic to imbue immortality. Yang tested the blade on himself, but its powers backfired, turning him and his students into ghosts and defacing his temple. Yang then reveals to Cole that he plans to use the Yin Blade to tear open the Rift of Return to revive himself, while the revived villains distract the ninja so they won't thwart his plans as Cole realizes his friends are in danger because of him.

At that moment, the villains begin their attack on the ninja all around Ninjago. With help from Eyezor and Zugu, Chen uses his dinosaur mech to attack Kai and Nya, who flee on the Raider Bikes. Cryptor and three Nindroids confront Zane in the snowy forest. Meanwhile, Samukai fights Jay as Krazi and Frakjaw apprehend his parents, and Pythor fights Lloyd and holds the latter's mother captive. Kozu and several Stone Swordsmen confront Dareth, who was responsible for taking control of the Stone Army.

Wu gets a bad feeling as Morro confronts him, though Wu is pained at having to fight his former student again, he states that he won't hesitate to do it again. However, Morro reveals he really has no intention of revenge; instead he tells Wu of Yang's plan and they set off to reunite the ninja.

Back at the Temple of Airjitzu, Cole breaks free and makes his way up through the temple after escaping his captors, fighting Yang's students along the way as Yang opens the Rift of Return. One by one, the ninja defeat all the revived villains, except Pythor, who flees after realizing he can't win his fight. In the meantime, Yang does Airjitzu to reach the Rift, but Cole stops him, and a fight breaks out between them.

The ninja reunite at the museum, telling each other what happened before Wu arrives with Morro, who the ninja prepare to attack but Wu stops them and Morro proves his innocence by unveiling Yang's plan and how the ninja forgot Cole. The ninja journey to Yang's temple while Morro's spirit peacefully returns to the Departed Realm.[1] Cole battles Yang as the ninja fly over on the Bounty. Yang soon overpowers Cole and mocks him as being another forgotten ghost. However, with his friends approaching and calling out to him, Cole's heightened vigor makes his arms rock-solid, and with them, he shatters the Yin Blade. This act frees Yang's students from his control, while Cole tells them to cross through the Rift, and after they do they become human again. Yang admits he failed his students and wanted to live forever so no one would forget him, to which Cole says he'll be remembered as the creator of Airjitzu.

Cole then persuades Yang to accompany him through the rift. Together, they ascend towards the Rift, but Yang tells Cole it's impossible. The curse of the Temple needs someone to remain in the temple as a ghost to be the "master of the house" due to the curse. Yang then decides to settle his own "debts" and launches the confused Cole through the Rift, just as it starts to close. The shockwave of the Rift closing causes Destiny Bounty to have a hard landing at the Airjitzu temple. The ninja soon start to worry if Cole didn't make it in time, as Jay states he'd give anything to have his friend back. At that moment, Cole emerges from behind a rock, a human again, while asking Jay will include the Sonic Raider Jet.

The ninja celebrate the return of their friend before looking at the restored Temple of Airjitzu which Cole suggests they make into their new base. Not long after, the ninja and their allies gather around a fire outside of Yang's temple after Cole told the story. Jay asks him if he was going to tell the story every time the holiday comes to which Cole replies only if Jay admits he was scared the temple was still haunted to which the latter states that were the case but says he was wrong as there are no more ghost. Cole confirms this while looking back to the temple and winks at Yang, who stands inside and winks back in return. Those surrounding the fire let their lanterns float into the night sky, concluding their celebration.

Cole was the mascot ninja, and the promotional and box art was approprietly focused on the Crashcourse Canyon. The collectible items were the Departed Blades, except the Sword of Sanctuary. The sets mostly consisted of ninja vehicles. 70751 Temple of Airjitzu was released as part of the Possession wave over a year before "Day Departed" aired. However, it ties into the story of the special, as the set depicts the ninja using the Temple of Airjitzu as a base which happened at the end of the special after the temple returned to its original state. 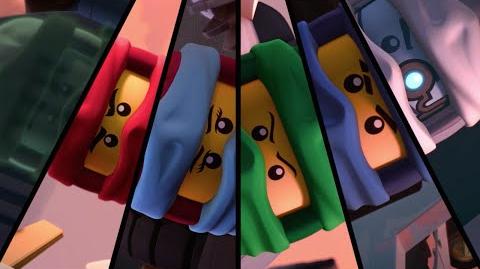 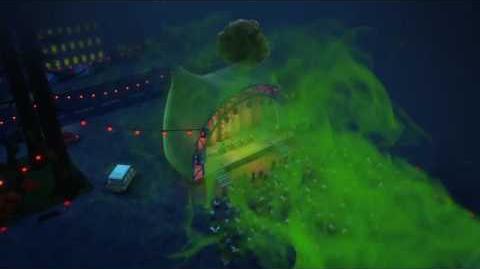