View source
“These are embedded with Deepstone. They will protect you from being possessed.”
— Wu to Kai, "Peak-a-Boo"

Intact
Deepstone is a deep black aquatic material that is mined from the bottom of the Endless Sea in the world of Ninjago. The molecules that Deepstone consists of are constantly moving, yet still staying solid; making it an effective material for utilization in both combat and defense against ghosts, since it has the same effect on ghosts as Vengestone does on the Elemental Masters.

One of its uses is to forge Aeroblades, a shuriken-like weapon that is highly effective against ghosts. It was also forged into armor, along with vehicles, for the ninja to aid them in their fight against the Preeminent.

Cyrus Borg built the Ghost Cycle out of Deepstone and upgraded the Ice Mech with Deepstone particle shooters, and the ninja used these vehicles during the ghost invasion.

When the four original ninja encounter Ronin in his pawn shop, he offers them Aeroblades and explains they were made from the material of Deepstone, selling them for an expensive price. After Morro and his Ghost Warriors attack Ronin at his shop, the ninja use the Aeroblades to gain an advantage over the ghosts.

Kai, Zane, Nya and Jay (except Cole, who was turned into a ghost) received added Deepstone armor on their suits. Wu explains to them that the armor, while heavier, does protect them from being possessed by ghosts. As the Soul Archer fires an arrow at Kai, the Deepstone was proven to prevent him from turning into a ghost. After Zane defeated Ghoultar and sent him off the Wailing Alps with his Ice Mech, Wu, Ronin, Nya and Misako trapped him in a cage with Deepstone bars.

After being freed of Morro's possession, Lloyd began to wear Deepstone armor.

Cyrus Borg gave Cole his Ghost Cycle, which was made of Deepstone to effectively fight the Ghost Warriors.

Infamous through The Last Resort

Nya would continue to wear her Deepstone armor until halfway in "The Last Resort". She is even seen wearing it after Jay's final wish in "The Way Back". 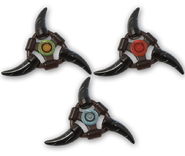 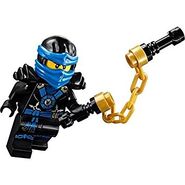