“
Whoa, it's the Destiny's Bounty! I've always wanted to shoot at it! Attack!
— A Shark General
„

Intact
The Destiny's Bounty is a large airship used by the Ninja as their main headquarters.

At an unknown point in time, Wu and the Secret Ninja Force acquired the Destiny's Bounty.

After defeating Garmadon, the Secret Ninja Force heads back to the Ninja Mech Garage, shortly after, Master Wu arrives back from his journey on the Destiny's Bounty. It is destroyed in the second invasion of Garmadon's Shark Army.

After Garmadon betrays the Ninja, they are saved by Wu, after his apparent demise, on the rebuilt ship. They arrive in Ninjago City to see their city destroyed, and Garmadon gets eaten by Meowthra.

The Destiny's Bounty is a flyable, as well as a floating, ship. It has no defenses but does have a weapons room. 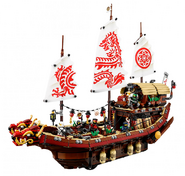