You may be looking for Darkness, a similar element.

“
Do not confuse Destruction with Darkness. Darkness feeds on Creation. It needs life to make evil. Destruction fears Creation. Destruction only wants to erase all life.
— The Book of Elemental Powers
„

Used
Destruction is an elemental essence[1] in Ninjago. It is the opposite of Creation and is purple in color. It is the power Garmadon inherited from his father, originating from the Oni, who are a race of demons from the Realm of Oni and Dragons.

There are other abilities originating from Destruction that are available to the Oni or those who use the Oni Masks. However, it is also possible that the Master of Destruction can employ these abilities, seeing as Garmadon in his evil form has four arms, and his power is enhanced with Oni magic.

With the Oni Masks

Garmadon using his Spinjitzu against Samukai.

Garmadon using his Spinjitzu alongside Wu 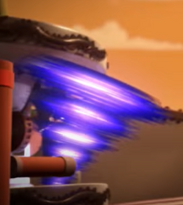 Garmadon using his Spinjitzu against Clouse.

The Oni of the First Realm, with the power to destroy

Garmadon unlocking his True Potential and gaining access to his recessive element of Creation. 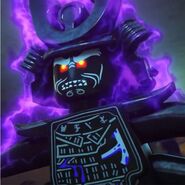 Garmadon uses Destruction to transform into an Oni

Black clouds of desctruction being used by the Omega