View source
“Early accounts of the mythical city of Shintaro claimed that the mountains surrounding it were home to a vicious species of bat, called the "Dire Bat."”
— Zane to the ninja, Shintaro"

Alive
Dire Bats are a vicious species of bats that live in the mountains of Shintaro, including Shintaro Mountain.

Along the ninja's way to the Kingdom of Shintaro, the Dire Bats attack the Destiny's Bounty and even attempt to take the ninja such as Jay. In the end, they leave, but the Bounty is destroyed and is about to fall, but the Army of Shintaro catch and lift the Bounty, saving the ninja.

While Cole is hanging off a cliff, one Dire Bat grabs Cole, but another Dire Bat fights for him. Cole then falls, but a third one takes him and starts flying away. Eventually, Cole manages to break free and hides in a cave, but the Dire Bat for some reason retreats.

When Cole, Vania, Wu, and the Upply make it through the roller coaster section of the cave with the Stone Mech, they realize they may encounter the Lava Monster they battled earlier again. After they out ran the Lava Monster, they awaken the Dire Bats. Fungus and Korgran fight off the bat-like creatures.

Unlike common bats, Dire Bats are very large and tower over most humans. Their fur is coated white while possessing sharp canines. They also possess long wings which resemble a bat, but also a extended tail and immense hands which can be used to carry anything.

Five Dire Bats in the background of a promotional poster for Master of the Mountain. 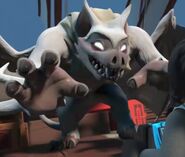