View source
“I know it doesn't look like much now, but this place will soon become Djinjago. With each ninja my Djinn Blade consumes, the more power I'm beholden to resurrect my home world. This is what you sacrificed for. Not some girl. For a home. I cannot do this alone, Flintlocke. I need you. I need our crew. Together, we can make this place ours.”
— Nadakhan to Flintlocke, "On a Wish and a Prayer"

Ninjago's sky (in an alternate timeline)

Sky Pirates (in an alternate timeline)

A Painful Promise (painting)
Djinjago[1][2][3] was a group of floating landmasses in the skies of Ninjago, created to supplant a realm with the same name after it collapsed as a result of the Cursed Realm's destruction. Given an ancient weapon by his father, the Djinn Nadakhan absorbed souls into a sword, which allowed him to tear chunks out of Ninjago and levitate them in the sky in an effort to recreate his home realm. Using various vehicles, including Raid Zeppelins and Misfortune's Keep, Nadakhan successfully resurrected his realm within Ninjago, and then sought to marry Nya in order to gain infinite wishes.

After Jay freed his fellow ninja from Nadakhan's Djinn Blade, they went off to the wedding ceremony at the Temple of Airjitzu (which was lifted into the sky earlier on) to poison Nadakhan and save Nya. Wu, Misako and various other allies went back to Ninjago to commence an evacuation, knowing that if Nadakhan is struck by a Tiger Widow's venom, he will lose his powers and Djinjago will fall apart onto Ninjago far below.

The ninja fly and crash Misfortune's Keep through Yang's former temple, destroying both the temple and the airship. Aided by Flintlocke and Dogshank, the ninja weaken Nadakhan with the venom—which causes Djinjago to start crumbling apart, destroying much of the city below along with the ninjas' ship. However, Jay realizes Nya was hit by the venom as well, and she dies. As Nadakhan tries to strike him down with his sword, Jay wishes none of the events since Clouse found the Teapot of Tyrahn and freed Nadakhan had transpired. Weak and unable to twist his words, Nadakhan granted Jay's final wish, erasing recent events.

With the Cursed Realm destroyed, Djinjago collapsed and the Djinn Blade was lost with it, while the Teapot of Tyrahn was buried under scrap metal on a barge in Stiix, and consequently, Clouse never found it.

Currently, the last remnant of Djinjago in the new timeline is the floating island containing the Temple of Airjitzu.

Djinjago in the Skybound mural.

The repo yard lifted into the skies leaves a big crater on the ground.

The last remnants of Djinjago seen in the sky. 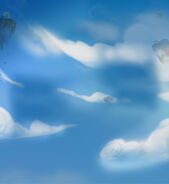