“Take the Sword of Souls.”
“But that sword is meant for—it's meant for the king.”
“Take it. It holds the life force of our forefathers, and all its enemies that have fallen from its blade.”

All except Amber, Water, Wind, Time, Destruction, Golden Power, and Darkness (in an alternate timeline)

Destroyed
The Djinn Blade, also known as the Sword of Souls, was a powerful weapon. Its origin dates back centuries along the line of kings in Djinjago. Nadakhan was given this weapon by his father when Djinjago collapsed.

The sword had the power to trap souls within it, either by causing people to wish themselves into it or by merely striking them down, who are then presumably subjected entirely under the owner's command. Due to the blade's ancient origins, it can be safely assumed that thousands of souls are trapped within it.

Once the blade was passed down to Nadakhan, he used the weapon to trap the ninja and the other Elemental Masters[1] to create a new Djinjago by tearing Ninjago apart, using the souls' strength within it to lift several tons of land into the air, forming sky islands to create an artificial Djinjago.

Due to Jay's final wish causing these events to not occur, the sword was most likely destroyed or lost during the collapse of Djinjago due to Nadakhan never arriving to retrieve it.

At an unknown point in time, the Djinn Blade came into existence and would come into possession of each Djinn King, absorbing the souls of their enemies, before finally ending up in Khanjikhan's possession. As per tradition, when a Djinn King dies he leaves his soul and his magic in the Djinn Blade.

Upon his arrival in the collapsing Djinjago, Nadakhan was given the Djinn Blade by his father as a means of recreating the realm and also due to his impending status as the new Djinn King. Nadakhan then used the Djinn Blade to transfer Clouse, Misako, and Wu from the Teapot of Tyrahn to it.

After tricking Kai into using his three wishes, Nadakhan absorbed the Red Ninja's soul into the Djinn Blade. Powered by another soul, the Djinn Blade was used to rip massive chunks of land out of Ninjago, slowly recreating Djinjago in the process.

Nadakhan unveiled the works of the Djinn Blade to his crew through the reconstructing Djinjago. Later, he trapped Zane inside it after forcing him to wish it all away.

During the Sky Pirates' ruse to trick Jay, he was sent to retrieve the Djinn Blade, only to find a decoy in its place instead.

Nadakhan used the Djinn Blade to call upon Zane's Ice, freezing the deck of the Misfortune's Keep. Cole used his second wish to remove the Djinn Blade from Nadakhan's possession, only for Flintlocke to give it back to his captain. Later, Clancee trapped Cole and Lloyd inside the Djinn Blade by wishing for it all to go away for the two of them.

When Flintlocke questioned Nadakhan's intentions, the latter briefly used the Djinn Blade to call upon Kai's Fire as a show of force.

Nadakhan continued using the Djinn Blade to finish the construction of Djinjago, allowing him to commence with the wedding. Later, when he attempted to escort Nya to the wedding, she convinced him to leave it behind, allowing Jay to steal it.

After regrouping with his team of ninja replacements, he proceeded to be struck and sucked into the Djinn Blade by Echo Zane. Inside the Djinn Blade, Jay rescued Wu, Misako, Kai, Zane, Lloyd, and Cole, freeing them in the process, before escaping, narrowly avoiding being dragged back inside by a vengeful Clouse.

Jay used the Djinn Blade to absorb one of the Sky Pirates' souls and continue wielding it in combat. During his final battle with Nadakhan, he attempted to use Clouse's Magic to defeat Delara, only to be interrupted and later drop the Blade. Later, while Jay cried over Nya's death, Nadakhan picked up the Djinn Blade and attempted to attack the Lightning Ninja with it, but after Jay used his final wish, he dropped it.

As a result of Jay's final wish erasing the events of the season, the Djinn Blade was left back inside the crumbling Djinjago in Khanjikhan's possession, and without Nadakhan to take it, was destroyed or lost following the realm's collapse.

After the reconstruction of the Monastery of Spinjitzu, a mural was painted to depict the major historical events the ninja have ever faced. On one of the murals, the Djinn Blade can be seen in Nadakhan's possession.

In the alternate timeline

The Djinn Blade, also known as the Sword of Souls, is the weapon of the royal house of Djinjago. Upon the realm's destruction, the king passed it on to his son, Nadakhan. The sword has the unique power to trap spirits within its blade, allowing the wielder to use their life force to increase his own power. It holds the spirits of Nadakhan’s forefathers and all those who have fallen before the blade. Nadakhan set out to capture the ninja by manipulating them into making wishes that went terribly wrong. He eventually trapped Cole, Kai, Lloyd and Zane in the sword, along with Wu, Misako and Clouse (the latter three were originally trapped in the Teapot of Tyrahn, but when the Teapot is destroyed, their spirits travel into the sword). They were later freed from the sword by Jay.[2]

All of the known abilities once possessed by the Sword of Soul's victims include: 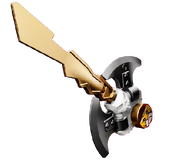 Nadakhan holding the Djinn Blade in the Skybound mural 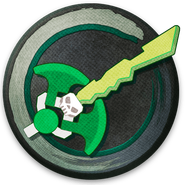 Nadakhan using his blade to absorb Kai's soul and power

Echo Zane holding the Djinn Blade after striking Jay down

The ninja escaping the sword

Nadakhan holding the Djinn Blade in the March of the Oni opening.