View source
watch 01:25
Jurassic World: Dominion Dominates Fandom Wikis - The Loop
Do you like this video?
Play Sound
“We fight like girls, not like cheaters.”
— Dogshank to Nya, "On a Wish and a Prayer"

Nicole Oliver
Dogshank is a member of Nadakhan's Sky Pirate crew. In her youth, she aspired to be the most beautiful, but after being visited by Nadakhan and having her words twisted, she was transformed into an orange behemoth. With far greater strength than she had before, Dogshank joined Nadakhan's crew. Sometime after the crew's defeat, she was marooned in one of the Sixteen Realms. In an alternate timeline, she and the rest of the crew aided Nadakhan in avenging and reconstructing his homeworld but ultimately turned on Nadakhan and helped the ninja defeat him.

Dogshank constantly sought to be seen as the most beautiful woman around; despite this, she would always be beaten by another, becoming "second-prettiest". Frustrated, she was eventually confronted by Nadakhan, a djinn, who offered to grant her three wishes, in return for becoming one of the Sky Pirates. Desperate, Dogshank agreed, wishing to be seen as one of a kind. As a result of the open interpretation of her wish, Dogshank was transformed into a hideous, hulking beast.[1] Despite this, she quickly embraced her new form and did not hesitate to use her strength to her advantage, and true to her word joined Nadakhan's crew aboard the Misfortune's Keep, gaining her position as the boatswain.

Later, she would participate in a battle against Captain Soto's crew and their ship, the Destiny's Bounty. However, after Nadakhan was imprisoned within the Teapot of Tyrahn, she was defeated and alongside her crew scattered across the Sixteen Realms.[2][3]

After being freed from her respective realm by Nadakhan through the use of the Realm Crystal, she reunited with her fellow pirates Flintlocke, Doubloon, Monkey Wretch, and Clancee. After gloating about her masculinity to Flintlocke, she and her friends would later celebrate aboard the Misfortune's Keep and made the decision to accompany her captain to his home of Djinjago. However, she would witness the collapse of the realm and watch as Khanjikhan bestowed the Djinn Blade to his son, before returning back to Ninjago to plot vengeance against the ninja.

Dogshank would assist in converting the Misfortune's Keep into an airship and help operate it during its first flight. After screaming in anticipation of the ship crashing into the Mountain of a Million Steps, she would help free the ship and lead an attack on Ninjago City in order to draw out the ninja. After correcting Cole on being labeled as a 'boy', she would proceed to brutally throw the ghost ninja around. After Kai was trapped in the Sword of Souls, she escaped alongside the rest of the crew.

Dogshank would witness the reconstruction of Djinjago, and after being promised it alongside the rest of her crew by Nadakhan, cheered for him in order to cement her loyalty. Later, she heartily accepted Nadakhan's request to accompany him to Tiger Widow Island, where she confronted Nya in combat. When the latter was trapped in one of the Tiger Widow's webs, however, she freed her opponent, proclaiming her sense of honor in combat before continuing her fight. When Nadakhan commanded his subordinates to get the Tiger Widow venom, she ended her fight, promising to have a rematch and would later be present aboard the Sky Shark after Jay was taken prisoner.

When Jay attempted to escape, she and Monkey Wretch confronted him. However, Jay managed to evade both of them by jumping onto Doubloon's passing Raid Zeppelin, only for her to gloat when he foolishly leaped onto a sky mine. Later, she would act as one of Jay's opponents in a game of Scrap and Tap and participated in the ruse to trick him into thinking the Sky Pirates were on his side, all in an attempt to break him.

When Cole and Jay attempted to escape, she confronted and captured them alongside her fellow pirates. Later, she would participate in the ensuing fight when the remaining ninja began to use their wishes, only to fall onto the clouds below as a result of Cole's final wish. Luckily, Nya's last wish stopped her fall, and she attempted to capture them again, only to fail and subsequently leave on a Raid Zeppelin.

She participated in an attack on the police headquarters in an attempt to find Nya, confronting the Police Commissioner alongside Flintlocke and Nadakhan. After witnessing the Commissioner, Tommy, and Simon jump into the ocean, she watched Flintlocke's failed mutiny and subsequent demotion. Afterward, during the attack on Lighthouse Island, she smashed her way inside the tower and attempted to drag Nya back to her captain. However, when the latter yanked her hair out, she retaliated in anger over the underhanded tactic and fought back. She would end up being knocked into a portal the spilled Traveler's Tea made and arrived in the Tiger Widow's cave, being confronted by the titular spider. Undeterred, she easily scared it off, angrily lecturing the spider for its cowardice.

After finding her way back to Djinjago, she helped Doubloon and Clancee put Nya into her wedding dress, only to notice the Tiger Widow venom. She ended up heeding Nya's pleads to not report to Nadakhan.

Dogshank would participate in Nadakhan and Nya's wedding and would watch in horror as her friends Clancee, Doubloon, and Monkey Wretch were banished to different realms. Escaping with Flintlocke, she agreed to help the ninja stop Nadakhan and helped them against the Nadakhan clones by detonating several sky mines, destroying them. Later, after hijacking a Raid Zeppelin, she would help Flintlocke shoot Nadakhan with the Tiger Widow venom. However, upon realizing they had also struck Nya with the venom, the two of them proceeded to weep in grief.

As a result of Jay's final wish erasing the events of the season, Dogshank was placed back into the realm that Soto had imprisoned her in, with no memories of what had happened. However, her return would be brief when Clouse, unable to locate Nadakhan due to the time-reversal, managed to restore his magic using the energies of the Island of Darkness and summoned the marooned Sky Pirates to him. Although initially grateful, Dogshank was unwilling to serve another besides Nadakhan. Clouse solved this by threatening to banish her once more. With no other choice, Dogshank agreed to help Clouse with his plans. Getting to work, Dogshank and her fellow crewmates began ambushing ships under the cover of storms, attacking the sailors and kidnapping them for use as slaves mining the Dark Matter on the Island of Darkness.

While patrolling Digger's Deep, Dogshank noticed the ninja intruding in the mine, and excited for actual combat, rallied her fellow Sky Pirates to attack them. Confronting Lloyd, she was initially caught in his Spinjitzu tornado, only to break free with triumph. Despite her victory, however, Dogshank was quickly downed by a blast of Energy from the Green Ninja.

Regrouping with the rest of the Sky Pirates and Clouse to transport the final Dark Matter convoy, Dogshank came into conflict with the ninja, clashing with Nya in particular. Nya, hoping to make amends and befriend the pirate once again, offered to take Dogshank in as a friend. Dogshank, seeing an opportunity and corrupted by Dark Matter, agreed, lying in order to get close and attack Nya with a katana held behind her back; However, Nya, noticing the weapon, succeeded in knocking the blade aside.

After Clouse created a sandstorm to separate the ninja, Dogshank and her fellow Sky Pirates escaped, delivering the Dark Matter and using it to corrupt the Temple of Light. On Clouse's command, she then defended the area from the ninja with help from the Shadow Army. Clashing against the ninja, she demanded to know why they were still willing to keep fighting despite having already lost, prompting a reply from Nya that she'd never understand if she asked. Eventually, despite her best efforts, Clouse was defeated when Master Wu used the Golden Mech to disperse the Dark Matter. Overpowered, Dogshank and the rest of her comrades were subsequently rounded up and imprisoned in Kryptarium Prison for their crimes.

She was very different in the past, but Dogshank is now a vast, powerful fighter capable of wielding two chained anchors. She has her own, unique code of honor, even when fighting a ninja.

Originally an insecure woman who enviously sought to improve her beauty by 'standing out', labeling Dogshank as an attention-seeker, she would ultimately embrace her new form granted to her by Nadakhan. As a result, Dogshank would end up taking great pride in her masculinity, constantly showing it off and gloating about it, being very brash, outspoken, and grandiloquent.

She also had great anticipation for battle, being a brutal and aggressive fighter. Fiercely competitive and ambitious, Dogshank initially sought to be the best through any means, often resorting to cheating, only to still fail nevertheless. Having a change of heart and realizing the error of her actions, Dogshank likewise adopted a great amount of honor when it came to fighting others, insisting on playing fairly and even going so far as to assist her opponents should they be hindered by outside forces, and forged respect towards those who fought back well. Likewise, she took underhanded tactics such as Nya using hair-pulling personally and looked down heavily on the cowardice of the giant spider.

Dogshank also retained a sense of loyalty, being horrified when her fellow Sky Pirates Clancee, Doubloon, and Monkey Wretch were banished to other realms by her captain. Unable to tolerate his callous treachery, she would go on to help the ninja stop Nadakhan, and would eventually weep tears upon realizing Flintlocke had accidentally poisoned Nya with the Tiger Widow venom, crying in anguish over her former enemy's impending death.

Dogshank as a human in "The Tall Tale of Dogshank" 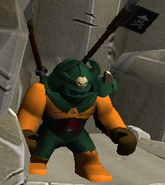