View source
watch 01:33
Wiki Targeted (Entertainment)
Do you like this video?
Play Sound
“
You were always the son I never had. It's time you begin your next stage in life. And the only reason I'm about to do this is because I love you.
— Dr. Julien to Zane before dying in a flashback in "Tick Tock"
„

Mark Oliver
Dr. Julien, also known as the Tinkerer, was an inventor who created several impressive robots, including Echo Zane, the Falcon, the Juggernaut, Tai-D, and most notably, his son Zane, who is also the Elemental Master of Ice and the first Nindroid. Julien took care of Zane in the years following his creation, before erasing his memory (to prevent Zane's memory of him passing away) shortly before passing away. However, Samukai resurrected Julien, using him to build vehicles for the Skulkin army. For much of his restored life, Julien was imprisoned inside a lonely lighthouse, which was guarded by a colossal sea creature—the Leviathan.

Shortly before the Final Battle, the ninja journeyed to the lighthouse prison, where Zane reunited with his father. With the ninjas' help, Julien escaped the lighthouse due to Zane freeing the Leviathan, allowing it to escape as well. Julien would go on to create several vehicles for the ninja, including the Earth Driller and Fire Mech, all while bonding with his son. Unfortunately, Julien had trouble keeping up with the ninja and stayed behind when they went to the edge of the Dark Island to combat the Overlord. Aspiring to make himself useful, Julien flew the Bounty to the scene of the battle, using the ship to block a missile that would've harmed Lloyd, Wu, and Misako. After leaving the Dark Island and returning to Ninjago City, Julien witnessed the final battle between Lloyd and the Overlord, and after Lloyd won, Julien rejoiced with everyone else.

Following the final battle, Dr. Julien passed away again from natural causes. However, his work influenced Cyrus Borg to build New Ninjago City. Yet Julien's image would be tarnished when the Overlord returned and took over Ninjago City. At the end of the conflict between the ninja and the Nindroids, Zane sacrificed himself to defeat the Overlord, with his original body being destroyed in the process. At one point in time, a statue of Julien was erected in Birchwood Forest. On the Day of the Departed, Zane commemorated Julien at his statue. Meanwhile, Cole accidentally revived the ninjas' old enemies, including the corrupt Nindroid Cryptor, who attacked Zane and destroyed Julien's statue. Once more, Zane defeated Cryptor, preserving his father's image as a trailblazing inventor.

Dr. Julien created Zane in his hidden workshop. As time passed, he taught Zane how to walk, speak, and perform other basic human activities, such as cooking and housekeeping. He taught Zane about life, and how it is a fragile thing. He also built the Falcon to serve as a companion for his creation.[1]

One night, an ill old man came to the workshop, and Dr. Julien took him in. The next morning after the old man left, Julien was visited by a man named Wu. Wu stated he was looking for Zane, and Julien proceeded to lead Wu to him. He then mentioned that it was as if winter followed the old man and that his son was acting peculiar after he left.[2]

Eventually, Dr. Julien's health began to fail as he grew old. On his death bed, he told Zane "The only reason I'm about to do this is because I love you", before turning off his memory switch, making Zane forget about his past so he could live a normal human life.[1][3]

Very soon after his passing, he was resurrected with special elixir administered by Samukai, who demanded that Dr. Julien build Skulkin war machines. Refusing to do so, Dr. Julien was kidnapped by the skeletons and placed in a lighthouse guarded by a tentacled beast known as the Leviathan. Samukai told him that he would be able to see Zane again if he complied, and Dr. Julien submitted to the skeleton's demands but was afraid that Zane would think he was a monster for creating the Skulkin machines.[4]

During his time in imprisonment, he built two more robots, Tai-D and Echo Zane, the former to keep the lighthouse clean and the latter to ease the pain of having been separated from Zane.[4][5][6] Dr. Julien read many books in his spare time, with adventure stories being his favorite.[7]

When the ninja set sail in the broken Destiny's Bounty toward the Island of Darkness, Zane sensed they were approaching an island before they crashed onto the shore. They got off to investigate and spotted a tall tower, with Zane calling it a prison. Dr. Julien opened the door excitedly upon seeing them, happily greeting his son and rushing them inside after mentioning an unspoken threat outside.

Dr. Julien barricaded the front door and looked around the island through a small camera, and after announcing that it was safe, he escorted them upstairs. He told his guests to take a seat and sent a small robot to hand out cups, pouring tea for them afterward.

Zane spotted his blueprints and questioned how his father could be alive. Dr. Julien told him of his resurrection and imprisonment at the hands of Samukai.

Zane promises him that he will figure out a way off the island, and Jay asks if Dr. Julien could repair the Destiny's Bounty. He tells them that he would have the Bounty repaired by dawn, but once they hear the growling of the Leviathan, Dr. Julien orders the ninja to hide. The Leviathan looks into the prison, and after seeing that everything is normal, leaves.

After they work on the repairs until nightfall and have dinner, Zane asks his father if he could make an adjustment in himself to remove his memory switch. Dr. Julien assures him that he is perfect the way he is, though Zane says that he likes his life and would not want to forget about him again. Dr. Julien tells him that neither of them will forget and that he is glad Zane found him, and as they hug Zane replies saying that he is thankful that he was created.

The two suddenly hear the Leviathan approaching, and they quickly rush to the Bounty to inform the ninja to escape. They all get on board, and as the Bounty begins taking flight, the Leviathan's tentacles grab onto the ship. Lloyd uses his powers in an attempt to release the monster's grip, which works temporarily before it grabs onto the ship again. Zane spots a chain attached to the creature and decides to unchain it. Despite his father's warnings, he jumps off the Bounty into the sea, swimming down where the Leviathan's chains remain and using the Starteeth to gnaw through the metal. Upon being released the monster stops attacking, and once Zane climbs back on the Bounty he explains that not even a monster deserves to be held captive.

On the Destiny's Bounty, Dr. Julien told the ninja of how they could find the Temple of Light using a medallion.

When in need of vehicles to help with the fight against the Stone Army, Dr. Julien and Nya both worked on building the Earth Driller and Fire Mech.

He later celebrated on the Destiny's Bounty with Master Wu, Misako, and Nya as they witnessed the Stone Warriors retreating from the Temple of Light.

As the ninja are celebrating the restoration of their powers on the beach, Dr. Julien finishes the repairs on the Falcon, allowing it to fly again. At the same time, he explained to Lloyd how every piece in a machine must work together for it to function.

The ninja return to the shore, Dr. Julien frantically questioning the sound of the horns in the distance. Master Wu explains to him that the Celestial Clock had reached zero and Lord Garmadon received the ultimate weapon, the Garmatron.

While the ninja rush after Lord Garmadon, Dr. Julien requests to be left behind as he cannot keep up, assuring Zane that he will stay in the Destiny's Bounty before saying his farewells.

Later, as the Overlord uses the Garmatron to fire a missile at Lloyd, Dr. Julien arrives in the Destiny's Bounty and uses it to block the attack, abandoning the ship while it crashes.

On the shore of the Island of Darkness, Dr. Julien helps bandage Lloyd's broken leg. He tells Lloyd that it is broken, and will take weeks to mend back. Afterward, he follows the Falcon alongside the ninja to the Temple of Light.

When the ninja used their four Elemental Blades to reveal the Golden Mech, he explains that time has rusted, after eons of disuse, the machine, but Lloyd manages to reboot it as he is the next Spinjitzu Master.

With the Mech and the Ultra Dragon, the ninja and Dr. Julien return to Ninjago. He, Master Wu, and Misako witness the Final Battle between Lloyd and the Overlord on the Ultra Dragon.

Sometime after the Overlord was defeated, Dr. Julien died from natural causes.[8][9]

Some time before reuniting with Dr. Julien at the lighthouse, the Falcon led Zane to the hidden workshop. Learning he was a Nindroid, Zane turned on his memory switch and saw all of the time he spent with his creator. It appeared that Dr. Julien created Zane because he did not have a family of his own, and he grew to love Zane as a son. Though Zane was initially disheartened by the revelation of his true nature, this knowledge ultimately made him feel stronger, which helped him unlock his True Potential to defeat the Treehorn queen.[1]

Dr. Julien was revered as a great inventor and as the creator of the first Nindroid, with Cyrus Borg later praising his work and saying that he would have fit right in the modern New Ninjago City. Ultimately, Dr. Julien's legacy of the Nindroid would be tarnished when the Overlord used Zane's blueprints to create General Cryptor and his Nindroid army.[8] Fortunately, sometime after the Overlord's defeat, a new faction of Nindroids was created to do good.[10]

Before his supposed death, Zane remembered events from his life, including reuniting with his father at the lighthouse and his father telling him he was built to protecting those who cannot protect themselves.[11]

When Nya and Jay were trying to escape from Nadakhan and his crew, they take refuge at the lighthouse, where Julien was once imprisoned for many years. During this, they discover another, more primitive version of Zane they name Echo Zane, whom Julien built as a makeshift companion during his own imprisonment.[5]

During the Day of the Departed, Zane returned to Birchwood Forest and constructed a statue of Dr. Julien in honor of him. The statue was then destroyed by Cryptor.[12]

Dr. Julien's words to Zane, "You were built to protect those who cannot protect themselves," stayed in the Nindroid's mind and motivated him throughout the following years. The word "Protect" was ultimately what snapped Zane out of his amnesiac role as the Ice Emperor in the Never-Realm role and triggered his memories to return.[13]

Drawing by Tommy Andreasen for Day of the Departed 2018 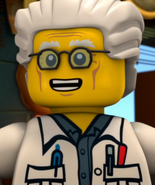 Being locked in the lighthouse

Cheering with Nya, Wu, and Misako