The Dragon Armor is a set of armor that was once worn by the First Spinjitzu Master before he left the Realm of Oni and Dragons. It was located in Firstbourne's nest until it was found by the Iron Baron and Wu. The latter briefly wore it before his body returned to his normal, old age. It is comprised of the Dragon Chestplate, Dragon Helmet, and Dragon Shield.

The Dragonbone Blade and Armor was created by Firstbourne and the First Spinjitzu Master.

Wu continues to wear the armor as he and his students return to Ninjago. When reuniting with Lloyd and Nya, the two were amazed by the armor and at Wu having aged into a teenager.

Wu uses the armor and blade to fight against his brother, Garmadon, alongside Lloyd. However, Garmadon incapacitates Wu by blasting him off the edge of Borg Tower, leaving only the Dragonbone Blade for Lloyd to use. Wu wears the armor to assist Kai, Zane, Jay, Cole, and the Resistance to take down the Colossus. 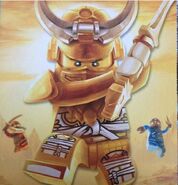 Wu wearing the Dragon Armor in the Hunted mural

Iron Baron with the Dragon Armor

Wu holding the blade and the shield

In the opening sequence
Deutsch Русский
Community content is available under CC-BY-SA unless otherwise noted.
Advertisement