View source
watch 01:25
Jurassic World: Dominion Dominates Fandom Wikis - The Loop
Do you like this video?
Play Sound
“For the city is built over an ancient dungeon full of untold treasures and loot. Countless adventurers have sought these riches and never been seen again. For the dungeons are also filled with dangerous creatures, traps and artifacts of terrible evil.”
— Vangelis to the Lowly, "Dungeon Party!"

Into the Dark
71717 Journey to the Skull Dungeons
The Dungeons of Shintaro are an underground cavern that was built by the evil sorcerer named Hazza D'ur.

A long time ago, an evil sorcerer named Hazza D'ur owned a skull that had incredible powers and used it to rule the Dungeons of Shintaro. He was later defeated, but his bones are said to be still in Shintaro while the skull remained intact.[1]

Sometime after Grief-Bringer was defeated, the Lowly entered the Dungeons of Shintaro and find the Skull of Hazza D'ur for King Vangelis. However, when Korgran touches it, Dark Magic tried to corrupt him, and he drops it in surprise. The group realizes the skull is evil, so they carry it by using Korgran's axe. Despite this, Vangelis changes his mind by saying that he can use the Skull of Hazza D'ur for the kingdom. However, when the Lowly disagreed by saying that the skull must be destroyed, Vangelis casts them out to Rock-Bottom.[4]

Eventually, Vangelis used the skull to resurrect the Re-Awakened as well as stealing the Blades of Deliverance from the Munce and Geckles, causing a rift between the two tribes.[5]

After entering the Dungeons of Shintaro, Vania talks Hazza D'ur's origins. They suddenly come across the Geckles and Munce mining for Vengestone in the Mines of Shintaro. Although, when Cole and Vania see the two tribes stopping after a wheelbarrow was destroyed, they see the Skull Sorcerer come out of the Skull Keep and use the Skull of Hazza D'ur to punish the workers for stopping. Cole then decides to intervene while Vania would warn her father. However, Cole gets defeated by the Re-Awakened.

While Cole is working along with the Munce and Geckles. The ninja attempt to save Cole, but a conflict between the two tribes allows the Skull Sorcerer to stop the ninja.

The ninja learn about the Blades of Deliverance and plot an escape plan. The ninja are able to liberate the Geckles and Munce, but they all take completely different paths.

Lloyd, Jay, and Nya follow the Munce to their home. They are greeted by Murtessa who flirts with Jay. This makes Nya upset, so Murtessa challenges Jay to a fight. Nya ends up winning, but she also gains the right to be queen.

Kai and Zane are brought to Gulch after the Geckles suspected the ninja to be with the Skull Sorcerer. In order to decide the matter, the Geckles decide to put them in a Trial-By-Mino. However, Kai and Zane are able to friend the beast after removing the Vengestone armor.

Kai is elected chancellor and suggests uniting with the Munce, but the Geckles think it's a joke.

Cole hands onto a branch before being picked up by a Dire Bat. He is able to escape the grasp of the beast but runs into the giant spider. Luckily, Vania and Chompy rescue him.

Cole and Wu are falling down a pit. Vania tries to save them, but the wings break and all three of them fall. They land on a spider web where Cole is wrapped up and is about to be eaten. However, Vania and Wu help Cole, and Cole decides to cut the spider web and they continue to fall.

They reach a stream and encounter a whirlpool. Cole uses his powers to stop it, but they are sucked in and find themselves at Rock-Bottom.

Cole, Wu, and Vania hear the Lowly's story of how they got to Rock-Bottom.

Cole, Wu, Vania, and the Lowly escape Rock-Bottom after Cole found his Elemental Energy. They then encounter a Magma Monster and are able to defeat it.

The Munce and Geckles head to the truce meeting, but when they arrive, tension rises between the two tribes. When the ninja are able to break it up, everyone flees after hearing the sound of Grief-Bringer.

Cole, Vania, Wu, and the Upply are running away from the Magma Monster when they stumble across some mine carts. They decide to ride it and end up at the Heart of the Mountain. While they are exploring, they discover Cole's mother performed the Spinjitzu Burst. Cole tries to perform it but gets frustrated after he fails multiple times.

The Geckles and Munce take refuge inside the Geckle Strong-Cave. Tension continues between the two tribes until they finally apologize to each other after they couldn't find another way out.

Cole uses the Stone Mech to push Vania, Wu, and the Upply who are in mine carts. Along their journey, they encounter the Magma Monster and Dire Bats.

Cole and the Upply spot the ninja locked up in a cage while the Geckles and Munce are back to working in the mines. Fungus and Korgran are able to give a key to Murtessa while Cole and Plundar retrieve the Blades of Deliverance.

During the execution ceremony, Grief-Bringer doesn't come out due to Cole throwing a rock at an Awakened Warrior. The Skull Sorcerer checks to see what's going on and spots Cole ready to fight him. Fungus and Korgran then jump into action and the Geckles and Munce liberate themselves. Adam and Plundar help free the ninja to join in on the fight.

Cole then remembers the promise he made to his mother and unlocks the Spinjitzu Burst, destroying the Skull of Hazza D'ur. With the destruction of the skull, the Awakened Warriors and Grief-Bringer become lifeless and return to a pile of bones. Vangelis also loses his costume and begs for mercy, but Vania informs Hailmar to take him away.

The ninja fought the Re-Awakened in the Mines of Shintaro. 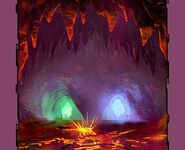