Ninja Replacements (in an alternate timeline)

The Last Resort
70594 The Lighthouse Siege

Brent Miller
Echo Zane is a Nindroid built by Dr. Julien using Zane's blueprint. His appearance is somewhat similar to Zane's, except he appears rustier, and instead of Zane's core, he has a wind-up power source. He seems to be less intelligent than Zane, although his sense of loyalty and friendship is no less than his titanium-shelled sibling. Echo Zane was found in the basement through a secret passage found by Jay and Nya in Lighthouse Island.

After being imprisoned in Lighthouse Island, Dr. Julien, in his loneliness, sought to make himself company through the creation of the Gizmo and Echo Zane, the latter of whom was a dead ringer for his first son, Zane. Unlike his brother, Echo Zane was faulty because he was made out of spare parts in the lighthouse. When the ninja arrived at the lighthouse, Echo Zane was left behind by his creator for unknown reasons.

After Dr. Julien's departure, Echo Zane would presumably often roam around the lighthouse with the Gizmo as his friend, usually repairing himself with the help of his friend.

After Jay and Nya arrived in an attempt to hide from Nadakhan, Echo Zane spied on them but was eventually noticed by Nya. Retreating to the basement to hide, he was quickly exposed, only to make friends when Jay and Nya revealed a lack of hostility towards him. While playing around with the two, Echo Zane noticed Nadakhan and Clancee spying on them through a mirror using the power of the latter's wish and quickly shattered it.

In preparation for the incoming invasion from the Sky Pirates, Echo Zane helped prepare several traps for the incoming enemies. Later, during the attack, he confronted Clancee after the latter got passed the door trap, only to be cornered by two pirates. However, upon seeing Jay and Nya in danger, Echo Zane overpowered his enemies, casually knocking aside Doubloon before confronting Nadakhan. Before he could fight back, however, his damaged state caught up to him and he fell apart into several pieces, being abandoned alongside his friend afterward.

With the help of Tai-D, Echo Zane managed to rebuild himself and was rescued from the Lighthouse Prison by Jay, joining his team of replacement ninja. Meeting in New Ninjago City, Echo Zane quickly detected Bucko and Sqiffy, and with the rest of the team succeeded in arresting Sqiffy before hitching a ride on a rising piece of land. Connecting to the rebuilt Djinjago, Echo Zane and the rest of the team managed to retrieve the Djinn Blade and took refuge in a nearby shed. Tasked with absorbing Jay into the Djinn Blade, Echo Zane accidentally mistook his signal "Go" under the wrong context, striking him down. After fending off Bucko and several other Sky Pirates, he reconciled with the freed ninja and his brother Zane, the two delighted on the revelation that they had a sibling.

To protect the citizens from the falling chunks of Djinjago, Echo Zane and the rest of the Ninja Replacements headed back down to New Ninjago City alongside Master Wu and Misako and later witnessed the realm's deconstruction.

Echo Zane in a Wu-Cru poster (left side background) 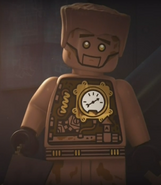 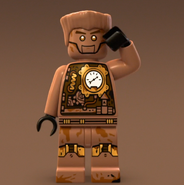 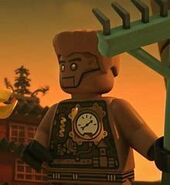 Echo alongside his brother

Walking on the ceiling