“
Well, because you have every other time the forces of evil have descended on this place. Just remember what we say in the scrap metal business. "Keep your emotions under control and focus on the problem at hand."
— Ed to Jay in "A Line in the Sand"
„

Colin Murdock
Ed Walker is the adoptive father of Jay Walker and the husband of Edna Walker, as well as the owner of Ed & Edna's Scrap N Junk. Ed is well known for his forgetfulness, and he often asks his wife to take notes for him.

At some point, he and his wife Edna found a baby left on their doorstep, with a key to the Gordon Mansion, and they raised him as their own.[1] He wanted Jay to work at their junkyard, but he refused.[citation needed] When he was a teenager, Jay went off to test his wings where he met Wu and left with him.[2][3] Two days before Ed and Edna visited Wu, Nya, and the other ninja, Ed called Jay.

Ed and Edna visited Jay at the ninjas' new headquarters, Destiny's Bounty. The ninja welcomed them and gave them a tour, but Jay was embarrassed by his parents' antics and quickly shoved them out with a hasty promise to visit them sometime. Disheartened by their son's icy reception, Ed sadly told Edna that Jay had outgrown them—the time had come to let him go and live his own life.

When the couple returned home to the Junkyard, Ed went to work on the surprise he was building for Jay. He heard a noise and called Edna to make sure the security was on, although she responded that it must have been broken. They were suddenly ambushed by Lloyd Garmadon and the Fangpyre tribe, who infected several of the machines around the junkyard to transform them into Serpentine Vehicles. Ed watched in horror as his creations were mutated, only to be informed by General Fangtom that his minions' bite worked just as well on humans.

When the ninja visited the junkyard the next morning, Jay found Ed and Edna bound together in an old freezer—worse yet, both of them were infected by the Fangpyre's bite. The ninja fought the Fangpyre, attempting to steal the Fangpyre Staff that contained the anti-venom to cure both Ed and Edna.

After the staff was retrieved, Nya cured Ed and his wife. After recovering, Ed used his mechanical expertise to fix the Destiny's Bounty's flight systems, enabling the ship to escape the Fangpyres. Jay told his parents that they would be able to return to the junkyard once things settled, but offered them to stay aboard the Destiny's Bounty for as long as they liked.

Alongside his wife, Ed attended the Ninjago talent show at the Concert Hall. He happily cheered for the ninja after their performance, booing when Pythor revealed his scorecard to be a zero.

Ed and Edna attended the "Take Back Ninjago Rally" in Ninjago City, but fled to their car when the rally was interrupted by the arrival of the Great Devourer. Before they could escape, however, they were surrounded by the giant snake but were saved when their son arrived just in time.

After the devourer was defeated, Ed and Edna met up with the ninja and congratulated Jay on his success.

He and Edna entered the Ninjaball Run competition, but they crashed in the Glacier Barrens when they helped Jay by giving him their fuel and a spare vehicle part to finish the race with a piece of them.

Ed and Edna were at the harbor before the ninja sailed off in search of the Island of Darkness. As Edna advised Jay to eat his vegetables, she demanded Ed tell him the same, only for Ed to tell him to listen to his mother.

Ed was helping the ninja find some parts. When the Nindroids started attacking, he and Edna left the junkyard with home-made jetpacks, leaving the others.

After Zane sacrificed himself to beat the Golden Master, Ed, his wife, and other citizens attended White Ninja's funeral.

Ed was among the crowd asked by the Jay to aid the ninja in their the battle against Chen and his forces.

Shortly after the ninjas' memories were erased, they journeyed to Ed and Edna's junkyard seeking help, though were pursued by Fangpyres. Ed and Edna helped them build the Mechanical ninja to protect the junkyard.

When the ninja were framed, Ed and Edna were interviewed on why Jay would commit crimes. They denied the accusations, but only worsened the situation by saying if he did commit any crimes, it was for a good reason.

Ed returned to the junkyard after running from picking up a few things to find Jay there, heartbroken as he had received a letter that his father had passed. Ed and Edna then finally admitted that he was adopted and gave him the note they had received.

Nya later called Ed, who told her that Jay would be at his birth father's mansion.

When Jay returns, once again, to the junkyard, he tells his parents about how helpless he was until Ed reprimanded him and tells him to find a few friends to assist him in stopping Nadakhan's wedding. As they watch their son leave, Edna said he was too hard on Jay, causing him to remark that it was why he married her.

Ed and his family were spending the holiday together before they come under attack by the Skulkin, commanded by a resurrected Samukai who came for Jay. Ed was worried when Samukai threatened Edna while Jay takes out the two Skulkin mechs used by Krazi and Frakjaw. Ed went onto help Edna, with them watching as Samukai begins fighting Jay, before Krazi and Frakjaw apprehend them. Horrified, he watched as Samukai manages to overwhelm Jay, beating him in the fight and preparing to kill him so that he can be fully resurrected.

However, Ronin appeared on the scene and used a mech suit and rescued the couple, briefly giving his reasons for being present while allowing Jay to take on his enemy.

After the Skulkin were defeated, a grateful Ed rewarded Ronin with a bag of scrap metal telling him all he had to do was ask for some.

When Lloyd recommended they would take the Jet, Jay tells him his father is fixing it. Ed had managed to get it fixed, but a butterfly soon landed on it, destroying it again, much to his annoyance.

Ed was present at Nya's memorial.

Ed is a playable character in LEGO Ninjago: Shadow of Ronin. He can be purchased for 10,000 studs after collecting his character token in Level 6: Ed & Edna's Scrap N' Junk. He uses melee attacks and can fix broken objects and use grapple points.

Next to Edna in a Wu-Cru poster (middle background) 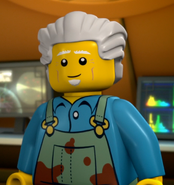