Ed & Edna's Scrap N Junk is a large junkyard in the Sea of Sand, not far from the original resting place of the Destiny's Bounty. The owners, Ed and Edna Walker, live in a trailer parked near the entrance of the junkyard.

The junkyard is rigged with a security system to ward off intruders. Several vehicles and sculptures are present, being worked on by Ed in his spare time.

While visiting Jay and his friends at the Destiny's Bounty, Ed and Edna asked their son to come by and visit them at the junkyard someday. When the couple got home, the Fangpyre tribe was waiting for them, having cut the power to the security system. As Ed and Edna watched in horror, the Serpentine began biting various machines around the junkyard, transforming them into snake-like vehicles. As General Fangtom and Lloyd Garmadon appeared atop the trailer, the Fangpyre bit Ed and Edna before tying them up and shoving them into an old refrigerator.

The next day, Jay and his friends came to the junkyard, only to be attacked by the Fangpyre forces. After fending off several vehicles and a Fangpyre Robot, the Ninja pursued the fleeing villains with their new vehicles created out of the Golden Weapons, successfully retrieving the Fangpyre Staff long enough to cure Ed and Edna of their infection.

When the Great Devourer was unleashed by Pythor and destroyed the Destiny's Bounty, the Ninja fled to Ed and Edna's Scrap N' Junk to formulate a new plan. To Jay's surprise, his parents were absent, having joined the "Take Back Ninjago" rally at Ninjago City. When the Great Devourer arrives, the Ninja use the Tornado of Creation, sucking in the junk around them to make the Ultra Sonic Raider.

While the Ninja looked for parts in the junkyard, they were attacked by Nindroids.

Jay visited the junkyard in order to rally support, notably Ed, Edna, Lou, and The Royal Blacksmiths for the Ninja and the other Elemental Masters against Chen's Anacondrai army.

Jay returned to the junkyard after receiving a letter informing him that his father had passed. When it turned out that Ed is alive, they revealed that Jay is adopted and give him the key that was left alongside him.

After escaping from Nadakhan using Traveler's Tea, Jay thought of the only place he could go to the junkyard. After getting patched up and encouraged by his adopted father, Jay decided to recruit a new team to stop Nadakhan.

After leaving the Museum, the Ninja went their separate ways to celebrate Day of the Departed. Jay arrived at the junkyard to spend time with his parents.

Samukai, Krazi, and Frakjaw started to attack the family. Ronin came and saved them with his Salvage M.E.C., originally intending to scavenge for scrap metal. Afterward, he thanked them for the bag of scrap, with Ed saying he just needed to ask for them.

Vermillion warriors steal metal from the Junkyard and kidnap Edna.

How to Build a Dragon (Flashback)

Jay left the junkyard to test his Mechanical Wings.

Shortly after the Ninjas' memories were wiped by Ronin, Nya visited the junkyard. The Ninja arrived not long after, being pursued by mind-controlled Fangpyre. Using pieces they could find around the junkyard, they rebuilt the Mechanical Ninja, which fended the snakes off long enough for the Ninja to continue on their way. 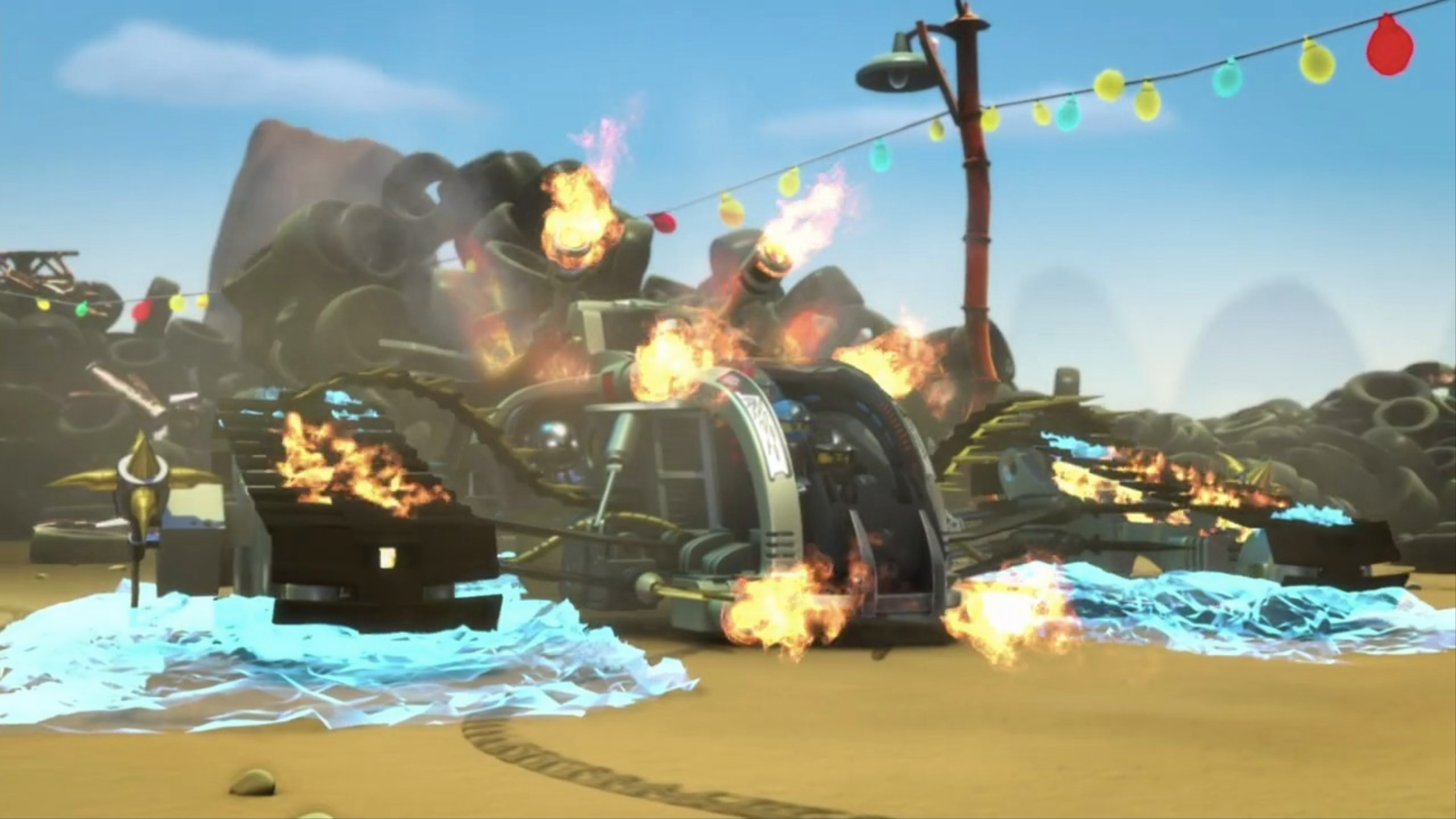 The Ultra Sonic Raider is created in the junkyard

The Ninja prepare to try out their new vehicles as Sensei Wu, Nya, Ed, and Edna look on

The Ninja look upon the defeated Fangpyre Robot

Overhead view of the junkyard

Add a photo to this gallery
Retrieved from "https://ninjago.fandom.com/wiki/Ed_%26_Edna%27s_Scrap_N_Junk?oldid=483790"
Community content is available under CC-BY-SA unless otherwise noted.