Edna and Ed raised Jay in a junkyard.[2]

Ed is seen at night walking along a canal with Edna while Lloyd passes by them on his way home, although they don't notice Lloyd despite him jumping on a boat and landing right behind them. 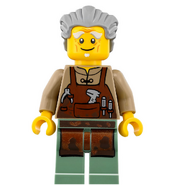