View source
watch 01:25
Jurassic World: Dominion Dominates Fandom Wikis - The Loop
Do you like this video?
Play Sound
“Wait, wait! I don't like to go anywhere without my purse!”
— Edna to the Vermillion, "A Line in the Sand"

Jillian Michaels
Edna Walker is the adoptive mother of Jay Walker and the wife of Ed Walker, as well as the co-owner of Ed & Edna's Scrap N Junk. Without realizing it, Edna constantly embarrasses her adoptive son in front of his friends.

Edna married Ed, the couple acting as co-owners of their junkyard. Sometime later, Cliff Gordon would drop an infant Jay off at their doorstep, and she and Ed would embracingly accept him as their son.[1] When Jay was young, Edna would call him her "precious little gift."[2]

At one point, she and Jay participated in the Mother-Son Skate-Off and won first place.[3]

How to Build a Dragon (flashback)

Edna told Jay to come back to the junkyard after he was finished testing his gliders.

Edna visited Jay alongside her husband, embarrassing Jay in front of his friends. After their brief tour of the Destiny's Bounty, she and Ed returned to their home in the junkyard, only to be ambushed by Lloyd Garmadon and the Fangpyre tribe. Edna ran to her husband's side as the Fangpyre began biting various vehicles and machines around the junkyard—transforming them into Serpentine Vehicles—shortly before she and Ed were bitten as well.

When the ninja arrived at the junkyard, they found Ed and Edna stuffed in an old fridge, slowly transforming into snakes due to the Fangpyre venom in their bodies. The couple watched as Jay led the charge against the Fangpyre, with Edna using a frying pan to knock out a soldier sneaking up on Sensei Wu and Nya. Eventually, the ninja stole the Fangpyre Staff from General Fangtom, and Nya used the antivenom to make tea for Ed and Edna. After drinking the tea, Edna and her husband returned to normal.

Edna was among the huge audience in Concert Hall with her husband. They both happily cheered for the ninja, booing after Pythor revealed his scorecard of zero.

When Ed and Edna noticed the commotion of the Great Devourer, they attempted to flee in their car, but Ed was having a hard time starting it. As the Great Devourer approached them, Jay rushed in before it could consume them.

She and Ed entered the Ninjaball Run competition in their Jalopy, though when they gave up their gas to help the ninja, they crashed in the Glacier Barrens.

When the ninja were preparing to leave on the Destiny's Bounty in search of the Island of Darkness, Edna and her husband were at the harbor. Edna advised Jay to eat his vegetables, demanding Ed to tell him the same thing, although Ed only told him to listen to his mother. Then as they sailed off, Edna asked if he packed enough underwear, much to Jay's dismay.

Edna was helping Nya transfer a portion of Zane's power source to P.I.X.A.L. When the Nindroids attacked, she and Ed used home-made jetpacks to escape the junkyard, leaving the others behind.

After Zane sacrificed himself to beat the Golden Master, Edna, her husband, and other citizens attended White Ninja's funeral.

Edna was among the crowd asked by Jay to aid the ninja in their the battle against Chen and his forces.

When the ninja, having lost their memories, came to Ed and Edna's Scrapyard to find Nya, Edna quickly hugged her son, reminding him he was his mom. However, Jay remarked he had not lost all of his memories. They were quickly interrupted by the attacking Fangpyre, and Ed helped them build the Mechanical ninja to fend the snakes off.

Edna was distraught while her husband was asked by the news of his view on the ninja's crimes.

Edna was visited by Jay at the junkyard, heartbroken as he had received a letter that his father had passed. Ed and Edna then finally admitted that he was adopted and gave him the note they had received.

As Ed scolds Jay for not doing anything when the world is in danger, Edna tells her husband not to be so harsh on their adopted son.

Edna and her family were spending the holiday together before they come under attack by the Skulkin, commanded by a resurrected Samukai. Samukai threatens Edna while Jay takes out the two Skulkin mechs used by Krazi and Frakjaw. As Ed goes to help Edna, they watch as Samukai begins fighting Jay, before Krazi and Frakjaw apprehend them. Horrified, she watches as Samukai manages to overwhelm Jay, beating him in the fight and preparing to kill him so that he can be fully resurrected. However, Ronin appeared and used a mech suit and rescued the couple, briefly giving his reasons for being present while allowing Jay to take on his enemy. After the Skulkin were defeated, Edna fixed Jay his favorite snack as Ronin was rewarded with a bag of scrap metal while being told by Ed that all he needed to do was ask for some.

She also was present at the Temple of Airjitzu when Cole told the story that happened.

When the Vermillion warriors attacked the junkyard for metal scarp, Edna sweeps away the snakes after Ed crashes his lorry into them before Jay arrived, being the only one to realize that they would attack his parents. When the Slow-Mo Time Blade arrived, Blunck orders the warriors to kidnap Edna. After building a bike, Jay was able to rescue her and took off, back to the junkyard.

She was at Nya's memorial with Ed. 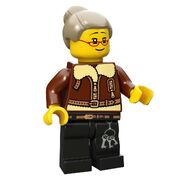 Next to Ed in a Wu-Cru poster (middle background)

Edna with Jay and Ed in Shadow of Ronin