“Magic's for wussies. I'll stick to good old nuts and bolts with a little ingenuity.”
— Jay to Clouse in "Spellbound"

Michael Adamthwaite
The ElectroMech is a ninja vehicle created for the Tournament of Elements. It is a large blue, gold, black, and brown mech that was built as a trap for Jay by Master Chen's forces. It has two blasters on its right hand to shoot at enemies and opponents.

The ElectroMech was one of the "gifts" that Chen put around his island to help the elemental fighters in the search for Nya. Jay eventually found it and reluctantly climbed aboard, as his leg was broken and he didn't want to walk anymore. The mech recognized the master of lightning, turning blue, and Jay set off in it to continue his search. He later used it in a battle with Clouse and his stone mech but lost when Clouse activated the self-destruct by accident. Jay was captured along with the rest of the Elemental Masters except for Lloyd and his father.

The mech was eventually repaired and Jay used it during the search for Skylor.

The ninja used the ElectroMech to reach Chen's palace after arriving on his island.

The mech was at one point taken from Chen's island and stored in the Samurai X Cave where it was present when Morro and his forces journeyed there.

Jay used his mech, while the others used their own again once more, to scale the treacherous mountain, the Wailing Alps, and get to the Blind Man's Eye at the top. However, when Morro noticed their arrival, he ordered Bansha to use her deafening scream to create an avalanche, sending all the ninja's mechs toppling down the side of the mountain. Jay's ElectroMech was destroyed when it crashed into a large rock jutting out of the ground, shattering apart on impact and launching Jay out onto the mountain.

The ElectroMech is capable of running, walking, jumping, and everything of the sort; it can also wield a Jadeblade in its left hand, or any other type of weapon. The Mech's right hand is made up of two blasters, each able to cause damage to the user's enemies.

Join forces with Jay and his amazing Electro Mech to take on the villain Eyezor. Get in the mech’s cockpit and stride into battle with the cool spinning blade and sword. Woah! Watch out for Eyezor’s vehicle armed with a powerful shooter firing at you! There are also dangerous spiders and scorpions to avoid! You must triumph in this battle between good and evil, and lead the ninjas to victory![1] 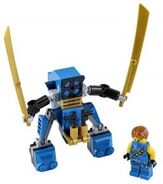 The original version of the mech

The mech after it was transformed

The back of the mech

Stored in the Samurai cave