The Electrocobrai are special mini snake/electric eel hybrids that acted as power sources for both the Nindroids and the Overlord Virus. They come from the Ninjago City Aquarium and are very rare. Pythor is the only Serpentine known to have a history of using them.

The hooded stranger (known later to be Pythor P. Chumsworth) breaks into the Ninjago Aquarium and steals another batch of Electrocobrai. They are used to reboot several more Nindroids and later used to power a tracking device inside the Falcon to track Lloyd and Master Garmadon. 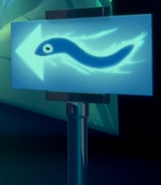 Add a photo to this gallery
Retrieved from "https://ninjago.fandom.com/wiki/Electrocobrai?oldid=576843"
Community content is available under CC-BY-SA unless otherwise noted.