View source
watch 01:25
Jurassic World: Dominion Dominates Fandom Wikis - The Loop
Do you like this video?
Play Sound
“Today, Ninjago is finally at peace. A great victory. And one we could not have achieved without each of you, the Elemental Masters. Smoke, Metal, Lightning, Shadow, Fire, Water, and Time!”
— Wu to the Elemental Alliance after the Serpentine War, "The Hatching"

Before the Serpentine War

Between the Battle for All of Time and pilot episodes

The Elemental Alliance was a group of the Elemental Masters formed by Wu and Garmadon during the Serpentine War and Battle for All of Time.

Forty years before Acronix's return, the Elemental Alliance protected humans from the Serpentine's various attacks across Ninjago after Master Chen sowed conflict between the humans and snakes. Various members of the Alliance, with the help of the Ninjago soldiers, fought a group of Serpentine led by the Anacondrai in Jamanakai Village but were ultimately overpowered by the Serpentine, who were able to seize the village.[1]

Not long after, the Alliance, soldiers, and rice farmers battled the Anacondrai in the Birchwood Forest. Chen used his manipulation tactics, including utilization of Hypnobrai hypnosis, to turn various Elemental Masters, including Master of Earth, against the others.[2] When it seemed the humans had lost the war, Garmadon realized the power of the Sacred Flutes. The Elemental Masters used the flutes' hypnotic abilities to drive the Serpentine underground into five separate tombs, while Arcturus and the rest of the Anacondrai generals were banished to the Cursed Realm.[1]

Battle for All of Time

After the members of the Alliance gathered at the Monastery of Spinjitzu and were congratulated by Wu, the Time Twins, Acronix and Krux, betrayed the Alliance, believing their element of Time to be superior. Over the course of a battle in a meadow, the Elemental Masters proved to be no match for the combined powers of the Masters of Time.[3]

Immediately after the Alliance's victory, Acronix and Krux's future selves appeared in a massive snake mech, intending to change history so that they would be victorious in the Battle for All of Time. Kai and Nya, the future children of Ray and Maya and future Masters of Fire and Water, had sneaked on board the vehicle along with Wu's future self, and they impersonated their parents in order to aid the Elemental Masters in the battle against the twins.[5]

The twins in their mech and with their Vermillion army were able to overpower the Alliance and force Wu to yield, but with the help of the Fusion Dragon and Reversal Time Blade, Kai and Nya were able to correct the timeline once again before chasing the twins' vehicle into the re-opened time vortex. Wu shouted to his past self to find Mystake and administer Obscuritea to the members of the Alliance so the timeline would not be further altered.[5] 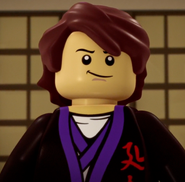 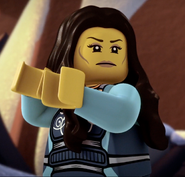 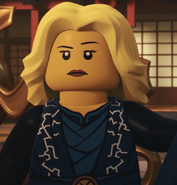 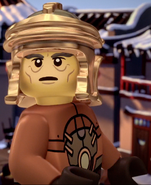 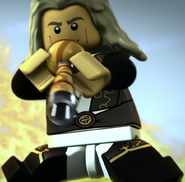 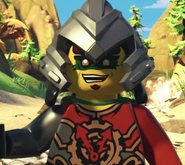 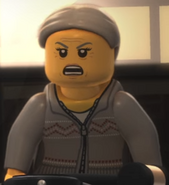 Ray, Maya, and the Elemental Master of Shadow

Painting depicting the Battle for All of Time