Not to be confused with elemental creations.

“When I realized it wasn't something in front of me that held me back, but something inside me, I found a deeper power. A dragon power.”
— Zane to the Elemental Masters, "The Day of the Dragon"

All except Destruction, Darkness, Amber, Sound, Wind, and Time

Existent (when manifested)
Elemental Dragons (also known as Power Dragons[1]) are metaphysical creatures created by the Elemental Masters. They are the physical manifestations of the powers of their Elemental Masters,[2] and by conquering and controlling their fears, the Masters can summon their respective dragons at will. Conversely, the dragon will instantly vanish if its Master loses control of his or her fear.

After the ninja grant Lloyd the Elemental Powers they'd just regained, the heroes do battle with the Stone Army, using their Elemental Blades. Lloyd summons the Golden Dragon to dispatch their foes from the Temple of Light.

Lloyd used his Golden Dragon for the first time, against the Overlord in the final battle after becoming the Ultimate Spinjitzu Master.

Sometime after the Final Battle, Lloyd used the Golden Dragon to stop the Venomari from burning down a village.

Lloyd arrived in New Ninjago City, riding the Golden Dragon, in order to aid the ninja. After the Digital Overlord takes control of the city, the ninja flee with the Techno Blades, as Lloyd, saddened by his uncle's sacrifice, follows on his dragon.

After failing to create a bridge, out of a mountain, with his Golden Power, while trying to perfect his power as the "Ultimate Spinjitzu Master," Lloyd summons the Golden Dragon to create a bridge of gold for him and his father.

After Lloyd returns the ninja's Elemental Powers, at the Temple of Light, thus giving up his Golden Power, he is no longer able to summon the Golden Dragon. Though he does retain an Elemental Dragon, it doesn't appear until much later.

Zane dreamed of the Titanium Dragon chained in a cave. He tries to escape and is about to be eaten before being woken up by P.I.X.A.L.

Zane found himself in another dream about the Titanium Dragon, only to be awoken by Cole.

Lloyd unleashed the Energy Dragon while he was free-falling onto Chen's Island by facing his fear of falling.

Lloyd used his to travel the island to find Skylor after the ninja were alerted of Chen's plan. As he did so, Karlof stated to an amazed Griffin Turner he wishes he could do that.

When Zane fell into a cave completely identical to the one in his dreams, he saw the Titanium Dragon again. He tried to use his powers to force it back, though his Ice went through it, in addition to P.I.X.A.L. trying to tell him it was in his head. Upon accepting he is now the Titanium Ninja instead of the White Ninja, Zane acknowledges the dragon wasn't real. P.I.X.A.L. told him his power was rising as he unlocked the Titanium Dragon.

At the same time, Kai and Skylor were captured and Kai witnessed as Chen used his daughter as the power source he needed to complete the spell, effectively turning the both of them, as well as Kapau and Chope (in addition to Garmadon and the other Anacondrai Cultists) into Anacondrai. Accepting Skylor's new form and learning her feelings for him are mutual, Kai unlocked the Elemental Fire Dragon and used it to escape.

When the Cultists escaped and headed off to Ninjago, Lloyd attempted to follow them on his own as he was the only Elemental Master with a dragon. However, Zane, Kai, and Skylor returned, telling the Masters it was fear and doubt that prevented them from unlocking their dragons. With this, the twelve remaining Masters unlocked their Elemental Dragons and used them to return to Ninjago City.

Riding a day after Chen, the Elemental Masters returned to Ninjago City to find the Anacondrai Cultists haven't attacked. While the ninja, Nya, Garmadon, and Skylor headed for the Samurai X Cave, the other masters took off on their dragons to keep watch. The ninja then used their dragons to fly to Kryptarium Prison to find Pythor and back. When Chen's trucks approached Ninjago City, Shadow led the masters to summon their dragons and prepare to take them head-on, only for the trucks to divide to conquer. The masters split up to intercept a truck each while the ninja also took on a truck. After Skylor realized the trucks were pulling the masters away from the people, Master Wu ordered them to stop the trucks. When they did, they saw the trucks were empty and lost their dragons out of fear.

Without their dragons, the ninja and the Masters took the trucks and returned to the Samurai X Cave. According to Gravis, almost everyone lost their dragons; despite this, they still managed to defeat the cultists when Garmadon had himself banished to have them cursed.

The ninja used their Elemental Dragons to track down and capture a giant fish that was terrorizing a nearby fishing village. Later, when they were using their powers to help advertise Wu's new tea shop, an unusual wind storm unexpectedly took them away. It was that night they learned the reason: Morro, the late Elemental Master of Wind, had possessed Lloyd, and was thus able to suumon a corrupted version of Lloyd's Energy Dragon.

Morro pursued the de-powered ninja on the possessed Energy Dragon in the air, and managed to ground the Destiny's Bounty along with taking Wu's staff which contained clues to the First Spinjitzu Master's tomb.

Since joining to be the newest ninja on the team, Nya as the Water Ninja is seen to have successfully created her Elemental Water Dragon.

The ninja rode their Elemental Dragons to the Monastery of Spinjitzu.

Upon receiving a letter that his father passed away, Jay used his elemental dragon to fly to Ed & Edna's Scrap N Junk.

In an attempt to find the mainland, Lloyd uses his Energy Dragon to search the vast ocean away from Tiger Widow Island . In the end, even he cannot sustain the energy for an extensive time and barely manages to return to the island with the remaining stranded ninja.

When Lloyd enabled Jay and Nya to escape from Nadakhan, the two ninja were unable to materialize their Elemental Dragons due to Jay's injuries and Nya's fear for him. When they locked hands during their fall, however, their trust in each other replaced their fear and their combined powers created a hybrid dragon, allowing them to escape.

Jay summoned his dragon to find allies to help him stop the wedding. He would later summon it to chase after Sqiffy and Bucko before they could warn Nadakhan. However, he was forced to let Bucko go and used his dragon to reach the land going up to Djinjago.

In spite of warning from his friends, Lloyd summons his Elemental Dragon, in order to take out the Vermillion, attacking the temple, from below.

As his friends warned, Lloyd is scared, causing his dragon to disappear. As he follows, Kai summons his Elemental Dragon to save him, but is unable to make it fast enough. Fortunately, Samurai X saves him in its mech.

After the Vermillion left the ninja fall into the Sea, the Dragon was summoned to save them.

To help aid in the battle, Kai and Nya used their dragon. However, Nya jumped off to retrieve the Reversal Blade. Without her, the Dragon disappeared. It reappeared once they reversed time, and Kai, Nya, and Wu follow the Time Twins into the vortex.

When Lloyd met the First Spinjitzu Master in the Grasslands, he also found out that he was with the Golden Dragon.

The Splinter in the Blind Man's Eye

When Quanish the Elder met the First Spinjitzu Master in the Grasslands, the Golden Dragon was also present.

An unknown Elemental Master on his Elemental Dragon. 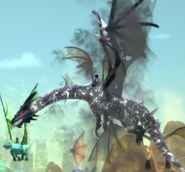 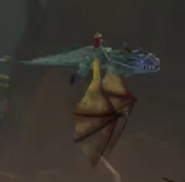